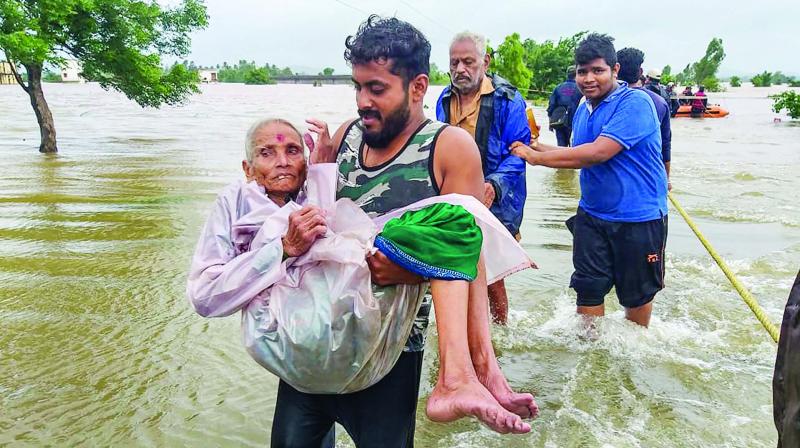 Muslims in Kolhapur, one of the worst flood-affected areas in Maharashtra, have decided to donate money that would otherwise have been spent on sacrificial cattle to flood-affected people. (Photo: PTI)

Mumbai: Muslims in Kolhapur, one of the worst flood-affected areas in Maharashtra, have decided to donate money that would otherwise have been spent on sacrificial cattle to flood-affected people. On an average, a person spends Rs 10,000 to Rs 20,000 on goats and still higher amounts on bovines.

Haji Abdul Qadar Malbari, the superintendent of Muslim Boarding, an educational institution which was established by Maratha emperor Shahuji Maharaj said that local Muslims had decided to help their fellow man. “We have appealed to Muslims to help people instead of sacrificing cattle as the situation in Kolhapur is terrible.”

He added that the management of the Madrassa Darul Uloom in Shiroli was providing shelter to people of all faith, including women, and helping them in whatever way possible. According to him, students of madrassa have been asked to remain present at the educational institution to see to the needs of those in need.

Meanwhile, Bakri Id is likely to be celebrated peacefully on in the city on Monday with the rains subsiding and fears about potential legal hurdles having disappeared, for now.

Muslims in the city were panicked after a few online portals had misinterpreted a Bombay high court order, saying that the high court had restrained people from sacrificing sheep and goats in housing societies.