Police will also use drones and 5K CCTV cameras to monitor procession. 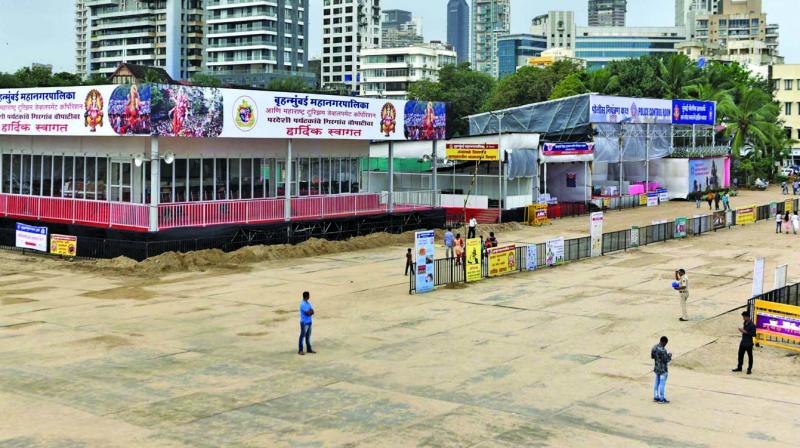 Arrangements made at Girgaum Chowpatty to felicitate Ganesh immersion.

Mumbai: As Mumbai is all set to bid adieu to Lord Ganesha today, a detailed plan for security, traffic management and idol immersion have been laid out by Mumbai police.

According to officials, around 5,000 Closed-circuit television (CCTV) cameras will monitor the procession. At least 53 roads will be closed for traffic; while 56 others will be open only for one-way traffic. The police have also declared 99 selected spots in the city as no parking zones.

Police officials said that the key routes will also be under surveillance by a squad of drones and their mobile command and surveillance centre. The footage from the CCTV network and the drones will be scanned at the main control room of the Mumbai police. Smaller centres for viewing CCTV footages have been erected at the Girgaum, Juhu, Dadar, Marve and other important beaches.

A force of over 50,000 police personnel will be manning the streets and the traffic police, home guards, NSS and NCC cadets will assist them, officials said. The immersion spots will be secured by the state reserve police, armed police, riot control police and quick response teams.

“The security drill will be similar to the one undertaken last year. The anti-eve teasing squads have also been deployed. They will comprise of plain clothed policemen. The bomb detection and disposal squads will be posted at important places,” said a police
officer.

Temporary clinics for providing medical assistance and lost and found centres (for items and children) have also been erected at the immersion points, the officials informed.

At least 3,002 police officers and 1,570 traffic wardens will be on the streets. The traffic police have made extra arrangements at places, where metro work is underway.

“The police and the BMC will deploy several towing vehicles and cranes at several places where break down of vehicles could cause traffic is-sues. The signages for traffic diversions have also been put up for smooth movement,” stated a notification issued by the traffic police.

Mumbai: The 10-day Ganpati festival will end wih the immerssion of the highest number of large to very large Ganesh idols. The Brihanmumbai Municipal Corporation (BMC) has prepared itself for a smooth Ganpati Visarjan, with 7,824 personnel deployed across the city and 78 control rooms.

The civic bodyhas also provided several facilities for devotees at the 69 natural immersion spots, including the five city beaches and 32 artificial lakes.

The civic body has set up 218 big nirmalya (discarded offerings to Lord Ganesha in the form of garlands, flowers, fruits and coconuts) kalashas; 267 vehicles for transportation of nirmalya; 896 steel plates for smooth movement of vehicles near beaches (as there is a lot of mud); and 2,717 floodlights.

“Forty-two inspection towers have been erected in extremely crowded areas and a fire brigade and 65 ambulances will also be kept on standby in case of exigencies. Sixty-nine first-aid centres and 58 mobile toilets have been set up for the convenience of devotees. For a smooth visarjan without event, the BMC has deployed 65 motorboats and 45 floaters,” a BMC official said.