The BJP had been trying to rope in Mr Patil as part of its efforts to wrest the Baramati Lok Sabha seat from the Pawar family. 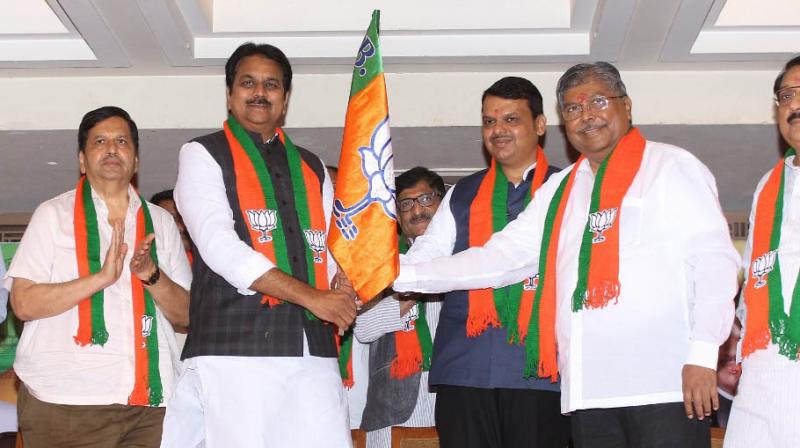 Mumbai: In a jolt to the Indian National Congress, former Maharashtra minister Harshvardhan Patil joined the Bharatiya Janata Party (BJP) in the presence of chief minister Devendra Fadnavis at Garware Club on Wednesday.

Mr Patil, state minister from 1995 to 2014, represented Indapur Assembly constituency, which is part of the Baramati Lok Sabha constituency.

The BJP had been trying to rope in Mr Patil as part of its efforts to wrest the Baramati Lok Sabha seat from the Pawar family. Mr Patil’s induction into the BJP is not only going to affect the Congress but also the Nati-onalist Congress Party (NCP) as the BJP would now try to wrest the Baramati seat — represented by NCP chief Sharad Pawar’s daughter Supriya Sule. It is percieved that Mr Patil was unhappy because the NCP had refused to give the Baramati seat to Congress.

In a veiled attack on the NCP, Mr Patil said that his constituency had faced injustice. He said, “I hope you (chief minister) will support us in our fight against injustice. One can choose one’s friends and foes but not neighbours. There are some issues with our neighbours which needs to be addressed.”

He also sought the chief minister’s intervention for increasing water supply to Indapur tehsil. “I come from a certain (political) culture, which necessitates protection of people’s interests. If I want to maintain that, I needed to be with the BJP,” Mr Patil said.

Mr Fadnavis, meanwhile, said that the party had been seeking to induct Mr Patil since the past five years the “auspicious occasion has come today”.

“His induction would give an impetus to the party,” Mr Fadnavis said.

With the Assembly elections inching closer, Opposition parties are witnessing a mass exodus with their leaders quitting one after the other.