Dhobi Ghat, a heritage structure, originally had about 5,000 shanties and 700 ghats. 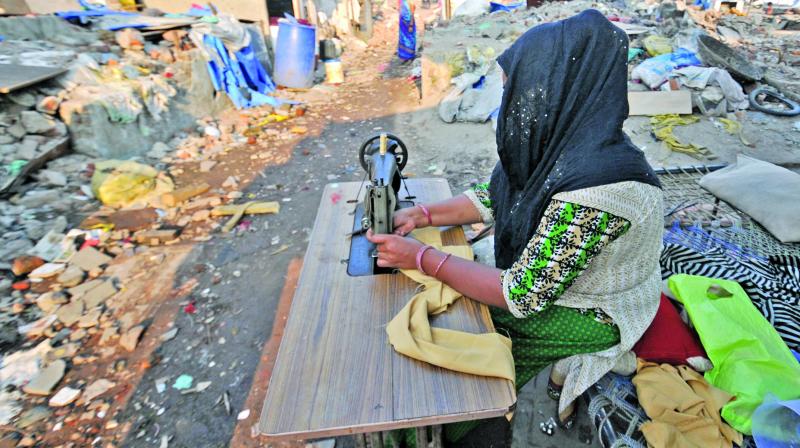 A woman works on her sewing machine at the spot where her shanty once stood at Dhobi Ghat.

Mumbai: Safina sits on the plot of her house working on her sewing machine, with her three-month-old son lying on a pile  of clothes beside her. While a woman sewing clothes is not out of the ordinary, her surroundings make for an eye-catching sight. Scores of women are seen working here everyday in the scorching sun, in the middle of the debris of their demolished homes in Mumbai’s iconic Dhobi Ghat. This is because the residents fear that they would lose this piece of land completely if they remain absent from it. It has thus become a new routine for them to work amidst the rubble of their demolished homes.

Dhobi Ghat, a heritage structure, originally had about 5,000 shanties and 700 ghats. It is now set to get redeveloped into high-rise buildings under a Slum Rehabilitation Authority project. Omkar developers bagged the contract two years ago and secured the mandatory consent of 75 per cent of the inhabitants. The demolition of about 1,500 huts took place in 2014. Subsequently, another 800-odd structures were demolished in November this year.

The erstwhile inhabitants of these razed structures are now gripped with the fear of losing their land altogether. This fear compels them to sit on their plots amidst debris and continue working as they would from their homes. Salma Khala, one such local, said, “The original inhabitants were about 800 dhobis, who owned all of this land. They sold it to other families like ours at high rates over some years. If we vacate this land, we fear that such a transaction would happen again.”

Neelam Khala, another local, said, “We are not physically leaving this land until construction of the high-rise houses we were promised starts.”

An Omkar developers spokesperson said: “Redevelopment work has already commenced. The construction of buildings will start as soon as the paperwork is complete. Houses will be handed over to the residents in the next two to three years. If there is a delay, we will compensate those concerned.”