3 held for killing friend over money

The police said that they robbed the 35-year-old of his gold chain and ring, drove him to the Vashi creek bridge, and flung him into the sea. 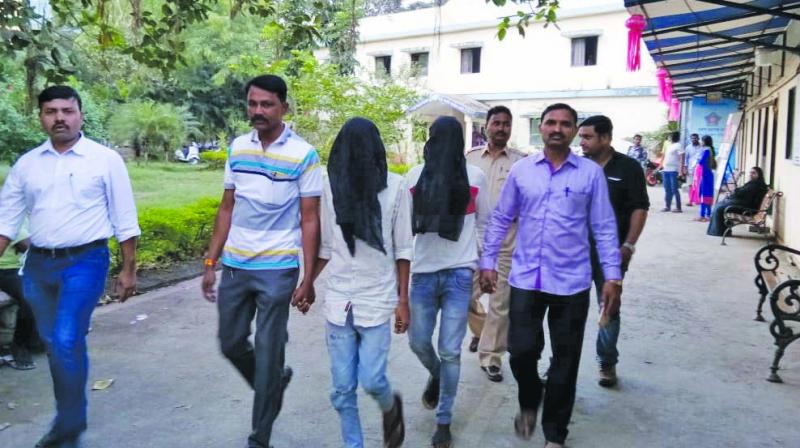 Police with the arrested accused.

Mumbai: The Govandi police has arrested three persons, including a 16-year-old, for murdering their friend after he refused to cough up money for drinking alcohol.

The police said that they robbed the 35-year-old of his gold chain and ring, drove him to the Vashi creek bridge, and flung him into the sea. They told the family that the victim had committed suicide by jumping into the sea.

The arrested accused have been identified as Avinash alias Tappu Dhilpe (26), Krishna alias Chamya Sutar (19), and a 16-year-old teenager who has been sent to a children’s home.

The deceased has been identified as Raju Gaik-wad (35), a close friend of all the arrested accused.

The Govandi police said that the accused and the victim were drinking alcohol the night of December 2 in Ghatla area of Govan-di. The group had an altercation after all of them sought money from Gai-kwad for buying alcohol.

The officials said that the accused then sat triple-seat on a two-wheeler and left for Vashi, and en-route, the accused snatched a gold earring from the victim and later his gold chain. Gaikwad felt threatened, by the time they reached Vashi.

“The accused flung Gaikwad into the creek and informed his family that Gaikwad had committed suicide in their presence,” said an officer of Govandi police station.

Gaikwad’s family found the whole episode suspicious and later appro-ached the police, alleging that the group of friends was hiding something.

The police then began questioning the accused and subsequently found out about the murder. The police eventually arrested the trio.

After five days of search operations, the Yellow Gate police station found Gaikwad’s body. The pol-ice conducted a DNA test, which confirmed it was Gaikwad. The accused have been remanded to police custody.