The cost of sand boa is pegged at around Rs 25 lakh. 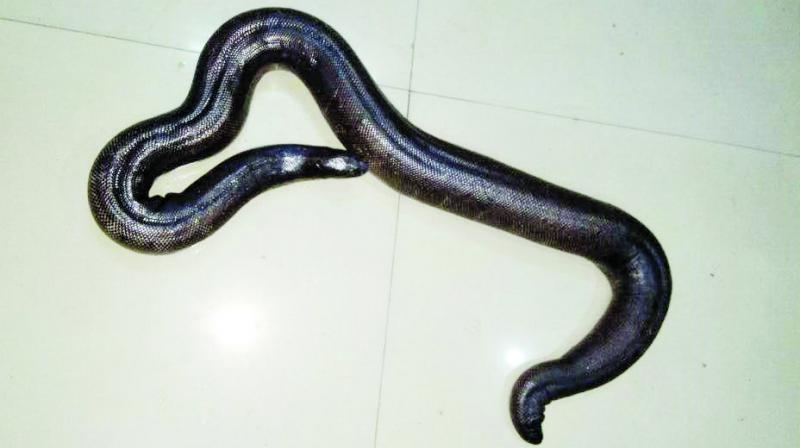 The seized sand boa snake was over four and a half feet long, weighing 3.7 kilograms.

Mumbai: The property cell of the crime branch has seized over four and half-foot-long sand boa snake, weighing 3.7kg and arrested one person at Reay Road late on Thursday. This is the second seizure of wildlife after the cell received training to crack down on wildlife and antique cases. The cost of sand boa is pegged at around Rs 25 lakh.

The arrested accused was identified as Vipul Joshi, 29, who was allegedly going to sell the snake for black magic activities, officials said. Joshi was apprehended from Sant Savata Marg in Reay Road by a team headed by Vinayak Mer and Deep Bane along with an officer of the Wildlife Crime Control Bureau (WCCB) D Adimalliya.

“The accused procured the snake from another person and has claimed that the snake was brought from Sahapur to Mumbai. The snake is used for medicinal purpose and in black magic activities. We are yet to ascertain the identity of the person who was going to buy the snake,” said a crime branch officer.

Joshi, a driver by profession, is reportedly a carrier of the endangered species. Officials said that sand boa is listed as a protected animal and hence its possession without relevant documents is prohibited.

The police has registered a case in the Sewri police station under section of the Wildlife Protection Act against Joshi. The magisterial court has released him on bail.