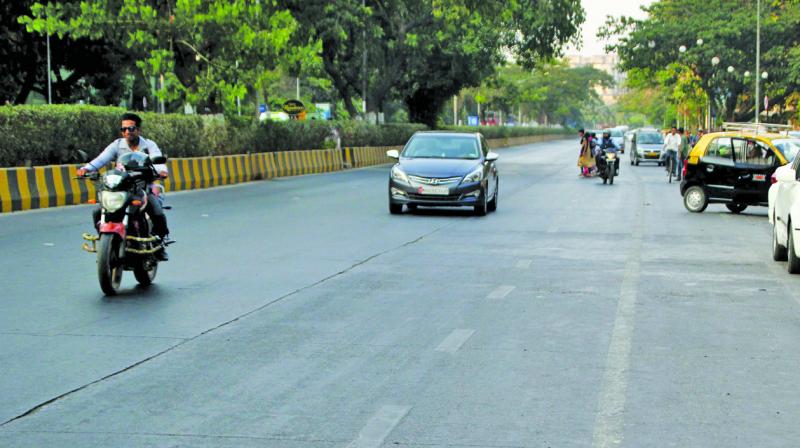 Bikers perform stunts and race on BKC roads and the Bandra Reclamation stretch throughout the night. (Photo: Mrugesh Bandiwadekar)

Mumbai: Of late, residents of Bandra and Kurla area are having sleepless due to unruly bikers who perform stunts and race in the wee hours on the peaceful stretches of Bandra-Kurla Complex (BKC) and Bandra Reclamation. To add to their woes, residents of Kurla had power failure on Thursday from 12 am to 4 am.

Following complaints from residents, the police caught four bikers who were performing stunts and racing at BKC without helmets on account of Shab-e-Baaraat on Thursday night.

According to Islamic scholars, people are supposed to stay awake and  offer prayers. The motorcycle rides are not a part of the religious practice.

The four arrested bikers were later released on bail as it is a bailable offence.  The police conduct nakabandis at several parts of the city to curb the bike-racing menace.

Karishma Mandal, a resident of Kalanagar said, “The screeching sounds made by the bikes in the middle of the night gives us jitters. We get scared if it was a fatal accident.”

Another resident, Harish Mathur, a senior officer of the Reserve Bank of India said, “A week ago when I had gone out with my family for a late night drive, a speeding biker zipped closely despite the road being completely empty.”

The traffic police has installed speed cameras worth `25 lakh in mid-February on the stretch from Bandra Reclamation to sealink and BKC to keep a check on unruly bikers and drivers.

Residents allege that the police hardly take action against the offenders. However, police sources claim that rash driving is a bailable offence. “Hence, the accused get away. The most we can do is seize their bikes for 30 days or till the court’s notice,” said a police officer.

Joint Commissioner of Police (Traffic), Amitesh Kumar said, “We have installed speed cameras to nab the accused drivers speeding on a bike and trying our best to curb the menace of bike races and bike stunts. We have also started drives and posted nakabandis and barricades to catch the bikers”.

Some residents claimed that they informed the police control rooms several times, but the cops often arrive late.

Fatima Shah, Indian Oil officer who lives in Bandra said, “We have called the control room at 4 am to complain about the ruckus, but the patrolling cars arrive only after the offenders had sped away.”

Kishor Kadam, a shopkeeper at BKC complained that his shop was attacked on Thursday night when a group of 15 bikers came with intent to steal.