The petition requires at least 100,000 signatures before May 14. 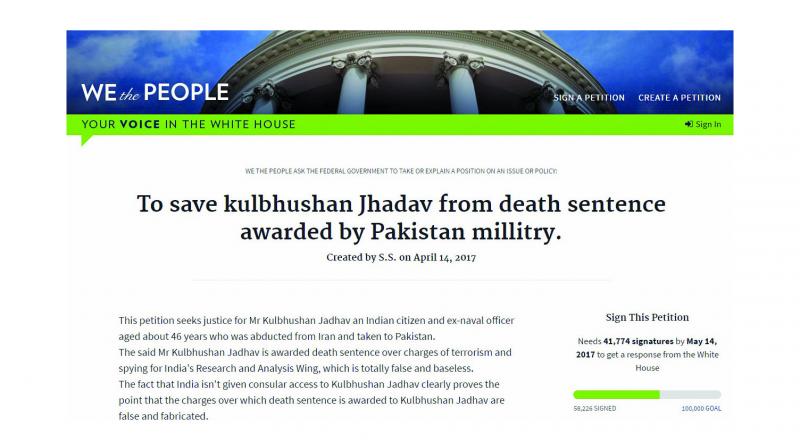 Mumbai: The mother and friends of former Navy officer, Kulbhushan Jadhav (46), who was sentenced to death by a Pakistani military court last month, have started an online campaign to demand freedom for him. The online petition, “To save Kulbhushan Jadhav” was initiated on April 14 and has so far drawn 57,312 signatures.

Jadhav’s friend, Balbir Singh, a Powai-based businessman associated with the petition told The Asian Age that once it draws 100,000 signatures by May 14, the US administration under President Donald Trump may intervene to free Jadhav from Pakistani captivity on charges related to spying.

The petition is hosted by a US-based website run by Indians based there. Execution of the Pakistani military court verdict was stayed on Tuesday by the UN International Court of Justice. Singh told this newspaper, “It is now the need of the hour to save my friend; he is innocent and we demand his freedom.”

“We do not want to leave any stone unturned; we want to see him back in India, and that’s what his family and I are wishing,” he said. Asked whether the response to the online petition would make any dent in his case, Singh said, “That is the reason we have chosen this online petition so that it will create an effect since now, everything if on the Internet. It is a genuine attempt to regain Jadhav’s freedom.”

The Asian Age could not speak to Jadhav’s mother despite attempts.

Meanwhile, the online petition says, “Allegations against Jadhav that he was spying for India are totally false and fabricated. The petition requires at least 100,000 signatures before May 14 to qualify for a response from the Trump administration. This petition seeks justice for Jadhav, an Indian citizen and ex-naval officer aged about 46 years, who was abducted from Iran and taken to Pakistan.”

In view of the above, I humbly request appropriate and capable authorities to intervene in the matter and make sure that Jadhav doesn't get punished for the act, which he never committed,” the petition further reads.