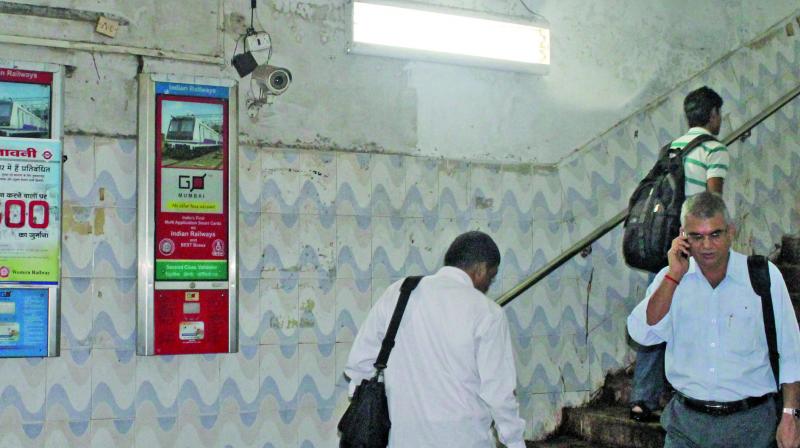 Railways will repositon CCTVs to get clear images of areas where footage was grainy. (Photo: Mrugesh Bandiwadekar)

Mumbai: The Railway Police Force (RPF), along with the Government Railway Police (GRP), have begun assessing the need to re-locate some CCTV cameras installed at suburban railway platforms and their entry and exits to optimise their reach and avoid blind spots, said railway sources. In certain incidents, even though CCTVs were present near the crime scene, they could not accurately capture the crime due to blind spots and poor outreach.

Officials said this change in the CCTV locations to areas with a better view would be vital as the aim is to get a clear visual of every person passing, from every angle in case of a crime. They added that if and when a crime does occur, there might be a partial view of the individual in question, eventually leading to an inaccurate or ill-informed sketch for the officials' reference.

An RPF official said, “When we draw up sketches, or have footage of a suspect from a limited angle, we are not able to pin-point the exact facial features, for example, high cheek bones, big eyes, a slight crook in the nose or a scar above the right eye etc, which are of help immensely.” He further added that a person’s grainy footage with generic Indian features makes it tough for a sketch as well as while trying to track the suspect. “The features I mention stick out in memory and the shopkeepers in the area, especially paan tapris etc, tend to remember when somebody is a little shifty eyed and standing for a long time at odd hours,” the official said.

Often the CCTV footage is coupled with groundwork investigation that finally leads the police to the criminal. Officials are not only looking at repositioning the CCTV but also the lighting conditions in which the footage is being captured. Confirming the exercise that is already underway, Central Rail-ways’ senior divisional security commissioner, Sachin Bhalode, said, “As far as the issue with light is concerned, if the camera is inside the station but is facing the entry/exit points of the station, it is capturing videos of an area where the light is much stronger or harsh. So the end footage is blackened due to the glare or the internal setting in the cameras.” He added that these settings will be changed and the cameras will be made adept enough to capture videos with more clarity here.