A high security alert was sounded Wednesday to prevent people from venturing into the sea off Marine Drive, Worli seaface and other beaches. 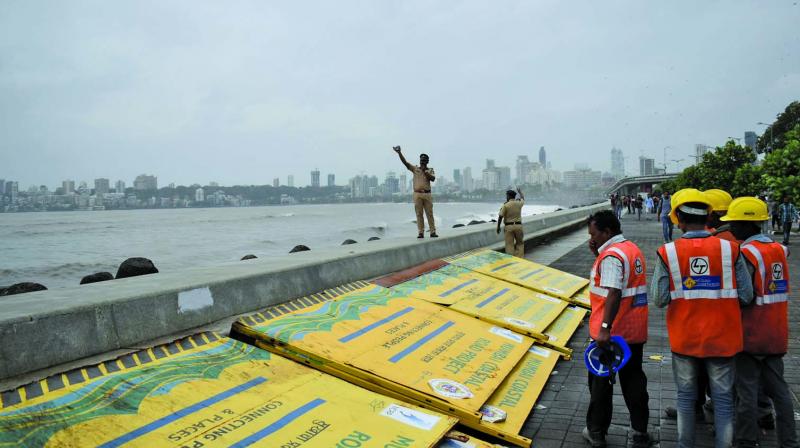 An Indian police man gestures to people to keep safe distance from shoreline on the Arabian Sea coast in Mumbai on Wednesday. (Photo: DEBASISH DEY)

Mumbai: The city witnessed light to moderate rain accompanied by wind throughout the day on Wednesday and the same is expected today.

While the showers were a result of cyclone Vayu and not an indication of the arrival of monsoon in Mumbai, they brought relief from the sweltering heat with temperatures dipping to 33 degrees celsius.

The heavy rainfall warning has been issued for Thursday as well and the disaster management unit (DMU) of the BMC along with the Mumbai Fire Brigade and Mumbai police have been asked to  brace themselves for eventualities.

The DMU has directed pre-positioning of the fire brigade along the city shores. A high security alert was sounded Wednesday to prevent denizens from venturing into the sea off Marine Drive, Worli Seaface and other beaches.

The IMD has issued an advisory for heavy rainfall and high-speed winds. The authorities have advised citizens to avoid standing near trees as tree falls are likely due to high winds. The civic body has also put up boards on trees across the city to warn people against taking shelter under such trees.

The IMD recorded 13 mm rainfall at the Colaba weather station and 7 mm at Santacruz. A total 75 tree falls and four incidents of wall collapse were reported in Mumbai on Wednesday.

Medical teams and facilities at the Indian Naval hospital are on standby to handle medical emergencies.