Kadu was fast asleep with her seven-month-old baby when the snake bit her. 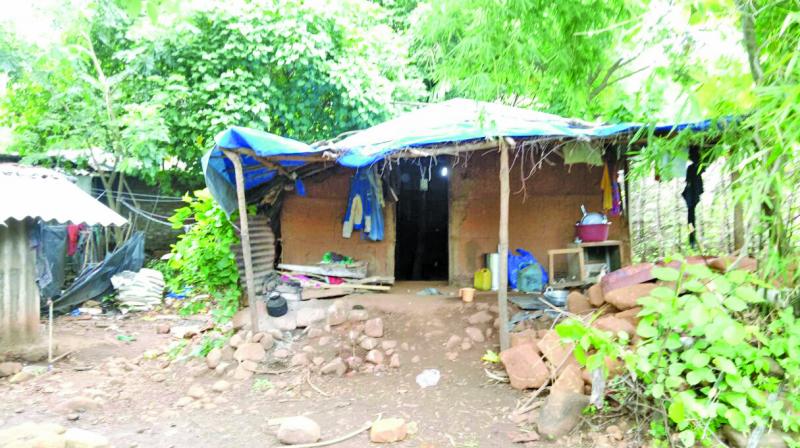 The deceased’s house where she was bitten by a snake.

Mumbai: 20-year-old Yashodha Kadu passed away after a ‘spectacled cobra’ bit her on her upper shoulder last afternoon in Jivacha Pada in Aarey Milk Colony. Kadu was fast asleep with her seven-month-old baby when the snake bit her. She died 15 minutes after the snakebite, even before she could be admitted to the hospital.

Experts said that this is probably the first case where the person passed away in a few minutes after the snakebite. The locals while rescuing the snake killed it on the spot.

When Kadu was fast sleep, her face towards the baby, the snake bit her from behind. After realising that something had bit her, Kadu woke up and started to call her neighbours to check the affected area. One of her relatives explained that Kadu panicked and started weeping after learning that a snake had bit her. “By the time we called for an auto rickshaw, she has started

feeling drowsy. She fell unconscious while we were on the way to Hindu Hruday Samrat Balasaheb Thackeray Trauma Care Municipal Hospital. We reached the hospital in maximum 20 minutes and rushed her to causality but the doctor on duty declared her dead on arrival.”

The couple stayed alone in Jivacha Pada since two years with their child in their hut. The husband was at work when the incident took place.

After Kadu was rushed to hospital, the snake rescuer had successfully rescued the snake, however, the snake was brutally beaten to death by the angry locals. It is believed that the victim suffered multiple bites on her upper back and succumbed to it.

Priyanka Kadam, founder of the Snakebite Healing and Education Society (SHE) said, “The lady had panicked after learning that she was bitten by a snake. Increase in blood pressure can worsen the patient’s condition in a venomous snake bite condition. Multiple bites on the upper shoulder near to the heart could also be one of the reasons for her quick death. However, only a post mortem report can clear the cause of death.”