The dolphin was 6 feet long and seemed to have died a natural death. 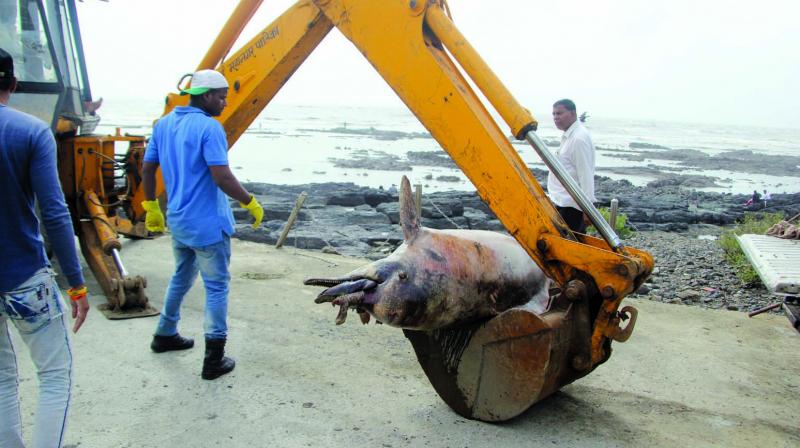 The carcass of a humpback dolphin washed ashore at Bandstand in Bandra. (Photo:Mrugesh Bandiwadekar)

The forest department on Thursday received a phone call regarding beaching of a dolphin near Rekha Bungalow at Bandstand Promenade, following which, a team visited the spot.

Prashant Deshmukh, range forest officer, State Mangrove Cell, said, “The dolphin was 6 feet long and seemed to have died a natural death. Since the carcass was not in a decomposed state, we transferred it to the veterinary hospital at Parel for a post-mortem.”

The forest department is waiting for the autopsy report to know the details of the dolphin and the cause of its death. Officials said that more beaching incidents were expected along the Mumbai coast owing to the monsoon season.

Mr Deshmukh said, “During the monsoon, strong wind currents push dead or injured marine animals onto the coast along with the high tide. In July, there have been at least three cases of beaching incidents till now. However after a long time we have come across a carcass that was not completely degraded which will help us to carry out a post-mortem.”

About the washing ashore of the humpback dolphin at Chimbai Beach, Mr Deshmukh said that since it was severely decomposed, they had to bury it immediately.