Police said that they have sent the deceased’s viscera for analysis and are probing the incident. 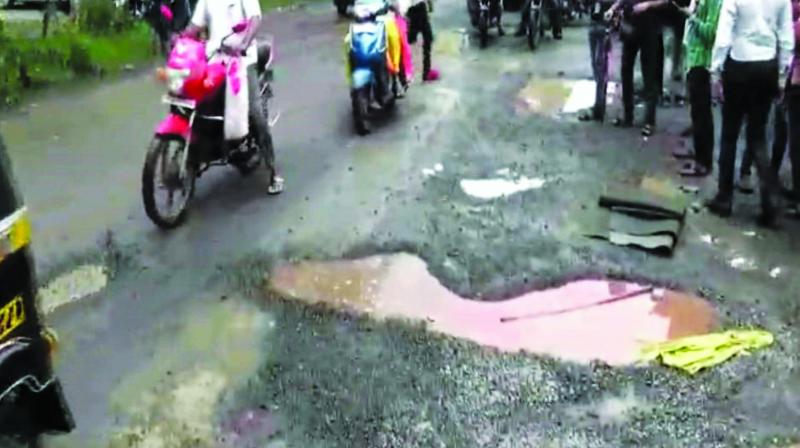 Mumbai: In what is suspected to be the second pothole-related death in a week in Thane district, a 45-year-old man was crushed to death by a truck after he allegedly stepped into a ditch after stumbling on Haji Malang Road in Kalyan on Wednesday. The Hill Road police station registered a case of 'death due to negligence' against the truck driver and have arrested him. Police said that they have sent the deceased’s viscera for analysis and are probing the incident.

The deceased was identified as Anna, a worker at a cow stable in Kalyan. He was on his way to work, officials said. The police have said that he was walking when the truck partially passed overhim and he came under the rear tyre. The police arrested truck driver Naseem Mohammad Khan, 45.

“The man collapsed suddenly after the truck's axle passed over him. He died on the spot. We are yet to ascertain if he fell owing to a pothole. The stretch on which he was walking was riddled with potholes. Medical tests have also been done to find if either the accused or victim were under the influence of alcohol,” said G. H. Palange, senior inspector of Hill Line police station.

Officials also said that they would approach the public works department (PWD), to seek an experts’ opinion, if needed. “At the moment, we are investigating based on the selfies taken by passers-by and witness accounts,” added Palange.

On Saturday, a bus crushed 43-year old Manisha Bhoir while she was riding pillion on a two-wheeler that hit a pothole in Shivaji Chowk area in Kalyan.

Meanwhile, the police have registered a case of death due to negligence against Khan. An official from the Kalyan-Dombivali Municipal Corporation (BMC) claimed that the road work has been delayed due to opposition from locals.