Water yet to subside at Vasai, Virar and Nalasopara 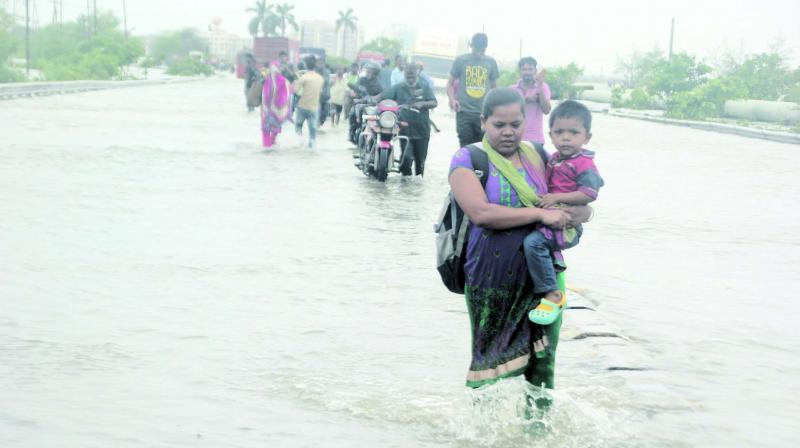 Water levels have receded only marginally.

Mumbai: Heavy rain for four consecutive days from Saturday to Tuesday inundated several areas of Vasai, Virar and Nalasopara, leaving residents stranded and struggling to remove the water inside their homes.

Virar resident Kartiki Godekar said, “Since three days, I have not gone for work. I have been stuck here in my house, which is full of water. Now that the intensity of the rain has reduced, I am busy cleaning my house.”

Palghar resident Jyoti Acharya said, “None of my electronic devices are working and we are left with just basic electrical equipment like lights and fans. Who is going to compensate for my loss?” In the absence of electricity, residents haven’t been able to pump water into their overhead tanks, either, she said.

Another Palghar resident Charu Prabhu Walavkar said, “My whole house is stinking. I am cleaning it since the morning. My parents are senior citizens. I have made temporary arrang-ements for them to stay on our terrace. This is a tough time for us.”

The Vasai-Virar belt recorded 242 mm rainfall on Tuesday. Heavy water-logging was reported in several areas of Vasai, Nalasopara, and Virar. On Tuesday, train services were suspended due to water-logged tracks amid heavy rain. Even as the rain subsided Tuesday night, the water levels receded only marginally. Many areas remained cut-off from the main town throughout the day, as a 3km stretch of road connecting these areas to the railway station was also under water.

Western Railway (WR) suburban services between Virar and Churchgate resumed nearly 24 hours later at 6.22 am on Wednesday, with a speed restriction of 10kmph between Virar and Bhayandar. The power supply to Vasai has been cut since Tuesday after there was water-logging at sub-stations.

Electricity was restored in the city not before 2 pm on Wednesday and by evening, power supply to all parts of Vasai was up, according to MSEDCL authorities.

In a major rescue operation on Tuesday, the police and National Disaster Response Force (NDRF), along with the Fire Brigade and others reached out to over 200 stranded persons.