Vasai, Virar and Thane have been losing wetlands to development and real estate projects over the years, activists claimed. 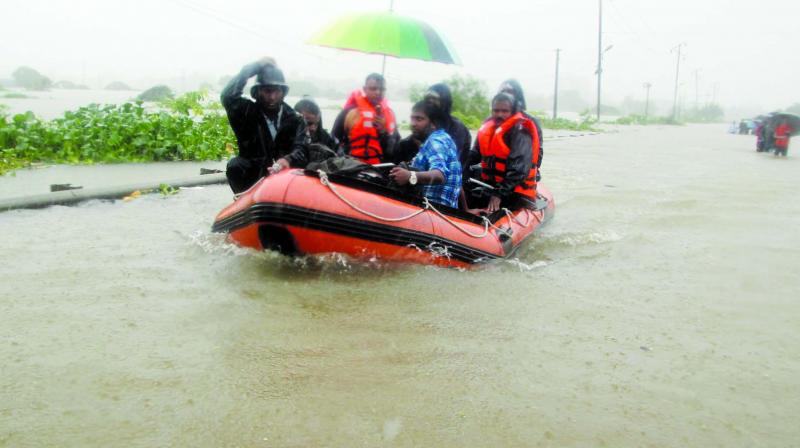 A family rafts for safety at Vasai.

Mumbai: Environmentalists have highlighted concerns over preserving the wetlands and saltpans amid instances of water-logging in the city due to heavy rains that disrupted traffic and the transport network.

They stated that Vasai, Virar and Thane — which have witnessed flooding — have been losing wetlands to development and real estate projects over the years, and such activities, if continued, will further deteriorate the situation in these areas.

“Across the years, a huge scape of wetlands in Thane and Vasai areas has been systematically reclai-med, which is why these areas are now showing these effects. Such reclamation has shrunk the natural drainage, and, if continued, the impact could be drastic,” said Debi Goenka, executive trustee of non-government organisation Conser-vation Action Trust.

The NGO had, in May, filed objections with the state government over the apprehensions of bullet train project passing through coastal areas and sensitive creeks of Palghar district. “If implemented with a design sensitive to these coastal areas, the effects could be mitigated, but we have to see how the planners lay out the design,” he added.

Stalin Dayanand, project director of NGO Vanashakti highlighted that Vasai and Virar are not fit for booming real estates project. “Both these areas are natural floodplains, low-lying areas. They have widespread wetlands and saltpans. It is not fit for townships built on raised reclaimed lands. More than 60 per cent of Thane’s wetlands have been destroyed over the years. It is time that the government look at these natural drainage in a more sensitive manner,” he said.