The railway officials have admitted that this is a setback to their efforts to ensure cleanliness for commuters. 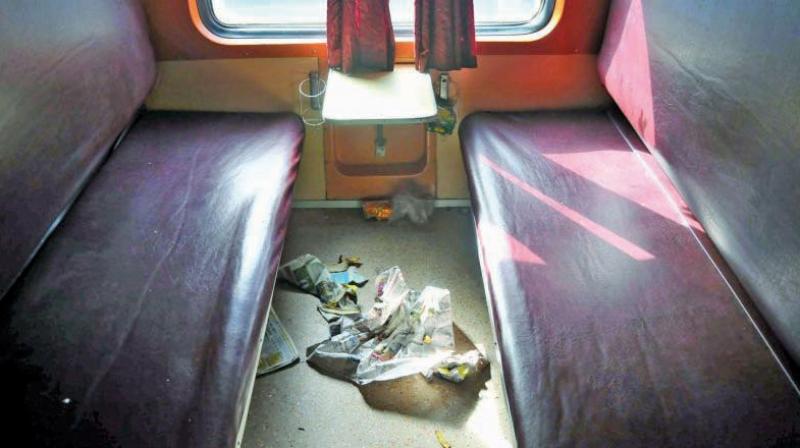 There are just two small bins to throw waste materials in for an entire coach of at least 72 berths.

Mumbai: A major roadblock in cleaning the railways is the way garbage is collected in long distance trains, due to insufficient trash bins. There are just two small bins to throw waste materials in for an entire coach of at least 72 berths. Authorities have admitted that there should be more bins, but due to the design of these trains, most of which were introduced a decade ago, it is not a feasible option.

With an increase in the awareness of better civic sense in trains, it becomes all the more important for the railways to place more than just two small dustbins under the sink for a coach in a long distance train. Dhara Kanani (25), an Andheri resident who often travels to Baroda with her family feels that the railways need to make better provisions for waste disposal inside a train. She said, “Most of the coaches have two dustbins places at either side of the coach, under the sink. This is not enough. Also, it promotes the habit of throwing trash either outside the window or under a fellow passenger’s seat.”

Railway activist Nirmal Tekamgarh saids, “It is now that the passengers have raised the issue of littering inside coaches. The railways had never thought of it as a problem by themselves. But now that it has been brought to their notice, they need to find a way of providing facilities like dustbins or at least disposable garbage bags, where perishable items like banana peels and leftover food can be dumped.”

The railway officials have admitted that this is a setback to their efforts to ensure cleanliness for commuters. An official said, “A decade or so ago, travelling etiquettes were not talked about as they are today, so the railways had not provided any viable solution for the issue with a dustbin to store the trash, keeping hygiene in mind. Two dustbins are not enough to accommodate the waste generated by a sleeper coach full of 80 to 100 passengers over a 10 or 15 hour journey.”

Around 70 long-distance trains bring in 31 tonne of trash to Mumbai stations on a daily basis. In addition to Clean My Coach the railways has also introduced the Clean Train Station, where in cleaning agencies clean up long distance trains when it halts at major junctions during its journey.