The Sena reiterated its promise of making farmers debt-free and added that if voted to power, the its govt would provide Rs 10,000 to poor farmers. 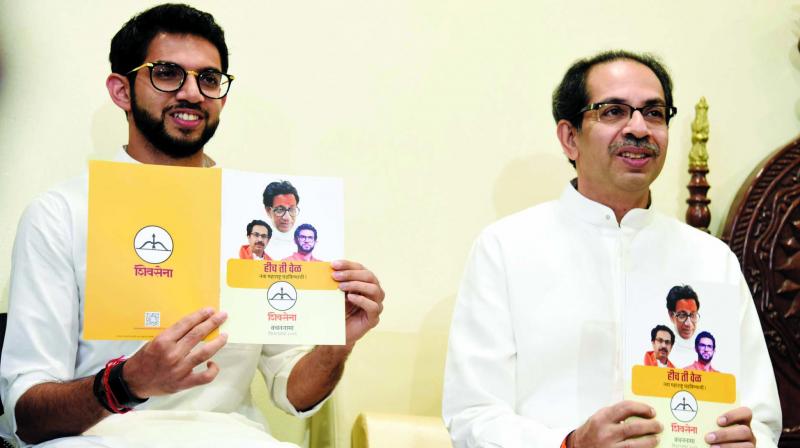 Mumbai: Populist promises like providing a full meal for Rs 10 and health checkup for just one rupee were part of the Shiv Sena manifesto released on Saturday.

The Sena president Uddhav Thackeray and his son, Yuva Sena chief Aaditya Thackeray, who would be contesting from Worli constituency, released the manifesto — called as “Vachan Patra” — at their residence Matoshree in Bandra on Saturday. The party manifesto promised to set up 1,000 food joints across the state, which would serve a full meal for just Rs 10.

“The meal will be clean and hygienic. For this scheme, centralised kitchens would be set up in every district. We would seek the assistance of women’s self help groups for running these kitchens,” Uddhav said.

Uddhav added that the “Rs 1 health clinic” would provide people affordable check-ups for over 200 diseases. The manifesto also promised to slash power tariff for domestic consumers by 30% for units below 300.

The Sena reiterated its promise of making farmers debt-free and added that if voted to power, the its government would provide Rs 10,000 to poor farmers.

Mr Aaditya claimed that the manifesto was prepared after taking into consideration the inputs received during the Jan Ashirwad Yatra. “We have made these promises after accounting for the burden on the state exchequer,” he said.