The buses were launched in March this year. 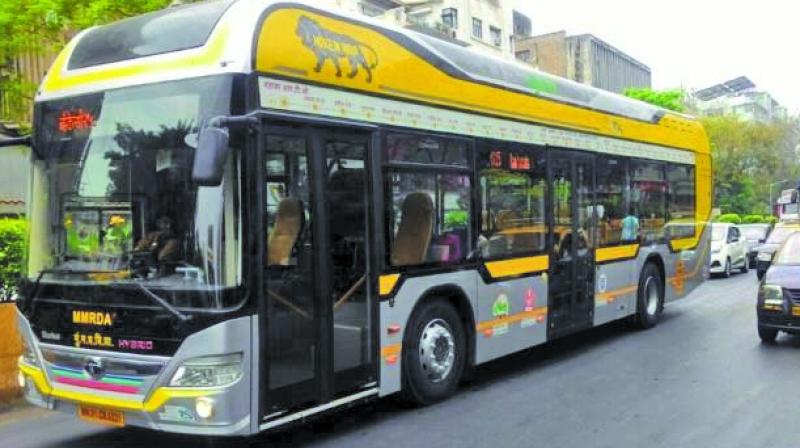 The MMRDA had purchased around 25 hybrid buses costing Rs 1.65 crore.

Mumbai: Hybrid buses run by the BEST are incurring a loss of Rs 1 crore per month due to low ridership, revealed a senior official from Mumbai Metropolitan Region Development Authority (MMRDA). The MMRDA had purchased around 25 buses costing Rs 1.65 crore and had handed them over to the BEST to run. The buses were launched in March this year.

A meeting will be held by the MMRDA with BEST to access the reasons against losses. The Asian Age had reported the menace created by auto rickshaws outside Bandra (east) station blocking hybrid bus routes in the area.

“We haven’t given any funding for the operations. People are not used to AC buses, so the hybrid buses are incurring losses of Rs 1 crore per month. It’s a huge amount and buses weren’t meant to suffer loses. Even SMRT in singapore are running buses but they are not incurring any loss. The BEST is not running efficiently, they have kept three drivers in place of one drivers,” said a senior MMRDA official requesting anonymity. He further added, “We will hold a meeting with the BEST officials to ascertain the reasons behind the losses and will figure out other routes if needed to boost the ridership.”

The Asian Age had reported in its March 27 edition about the hurdles faced by these buses in Bandra-Kurla Complex  area. At the beginning, the BEST used to collect nearly Rs 4 lakh revenue in a week. However now the AC buses run with barely 10 passengers.