Martyred army soldier laid to rest in his hometown

He served in the armed forces for ten years, according to army officials. 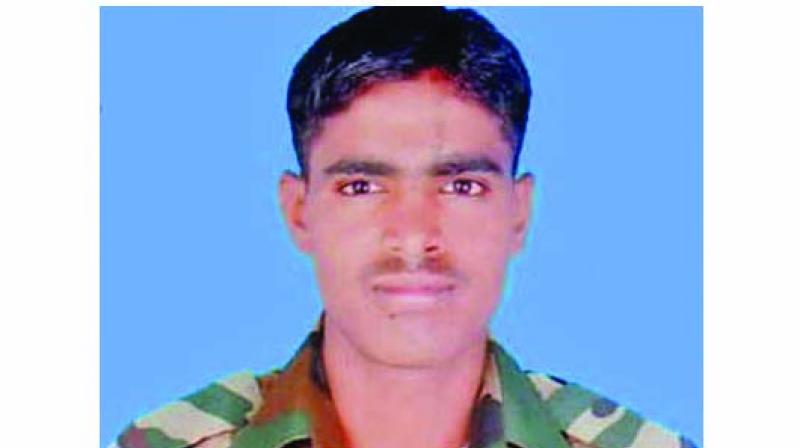 Mumbai: The mortal remains of martyred army soldier, Naik Gosavi Somgir, were brought to his hometown in Nashik Monday. The body was flown in from Jammu where he was shot from across the border by the Pakistani army in an unprovoked ceasefire violation. Somgir was laid to rest later on Monday with state honours. He served in the armed forces for ten years, according to army officials.

According to the Indian army, Somgir was martyred after the Pakistan army resorted to an unprovoked ceasefire violation in the Naoshera sector on the Line of Control (LoC) at about 2.45 pm Sunday. Somgir, an army soldier, was critically injured due to fire from across the border and succumbed to gunshot wounds.

A release issued by Lt Col Devender Anand, PRO (Defence), said, “Naik Gosavi Somgir, 29, hailed from Sri Rampur village in Nashik’s Sinnar. He is survived by his wife Yashoda Gosavi. Naik Gosavi Somgir was a brave and sincere soldier. The nation will always remain indebted to him for his supreme sacrifice and devotion to duty.”

The army official further stated that following the attack on the Indian army, there was a “strong and effective” retaliation on the Pakistan army posts. The wreath laying ceremony in honour of the martyr was conducted at 8.30am, following which, the body was flown to Jammu from the LoC post. The station headquarters at Deolali in Nashik was entrusted with the task of planning and coordination.

The mortal remains arrived in Nashik late evening after which Somgir was laid to rest with full state honours.