Maintenance team gave it clearance an hour prior to mishap. 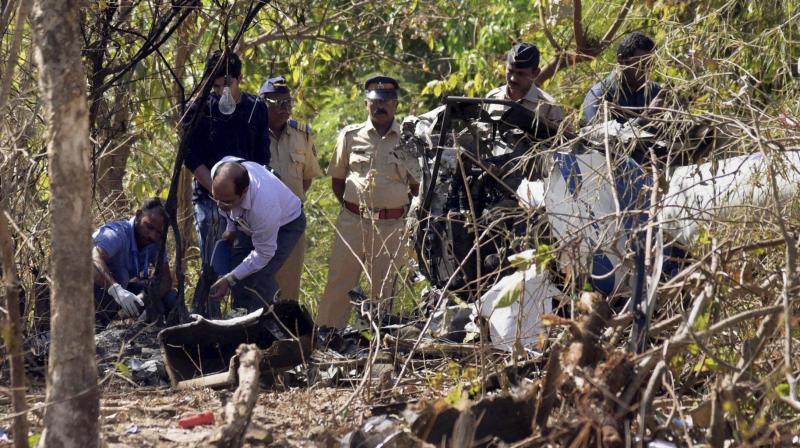 The Directorate General of Civil Aviation (DGCA) officials collecting evidences from the crash site during the investigation process to help Apex Accident Investigation Bureau (AAIB) in its probe in Mumbai. (Photo: PTI)

Mumbai: Private operator Aman Aviation’s helicopter, which crashed in Goregaon on Sunday morning, had been given a clearance by the maintenance team after an inspection only an hour prior to the accident. The aircraft was checked before it took the first joyride, which was followed by the ill-fated second trip. Commenting on the possibility of a clutch failure, sources said the clutch was made abroad and, while it was meant to be used for 2,200 hours of flying, the aircraft had been flown only for 1,400 hours.

Sources from Aman Aviation said the private operator’s officials suspect that a panic situation probably led to the incident. One of the officials told this newspaper that according to proper standard operating procedures (SOPs), whenever there is a problem with an aircraft’s clutch, a red light starts blinking in the cockpit. SOPs also dictate that when this red light starts blinking in the cockpit, the pilot is supposed to pull the circuit breaker (CB) and then land the aircraft as soon as it is possible, the official added.

He further said that in the case of Sunday’s accident, the aircraft’s engine and rotor were on. Thus, considering that the pilot had the option of landing in a nearby field, it seems that a certain amount of panic led to the accident. Tabrez Khan, an eyewitness who was present at the spot, added that the copter was flying at a height of about 10 feet and when it hit a few bushes.

Sources added that since the temperature of the aircraft always remains around 250 degree Celsius, it caught fire the moment it hit the ground and its fuel tank was broken.

Talking about checks before an aircraft takes off, a senior engineer from Aman Aviation said: “An engineer checks it at first and gives his clearance. The pilot then checks it from nose to tail, after which he or she declares the aircraft fit for flying.” He added that the aircraft, too, had been checked in the same manner.

Meanwhile, Aman Aviation CEO Rajendra Johari said that after the mishap, he had received calls from many people whom deceased pilot captain P.K. Mishra had piloted on joyrides. “These people expressed their sadness and recalled him as a wonderful man,” Mr Johari said.