The fare for the coach will be higher than the first AC chair car, which is roughly Rs 2,000, officials have said. 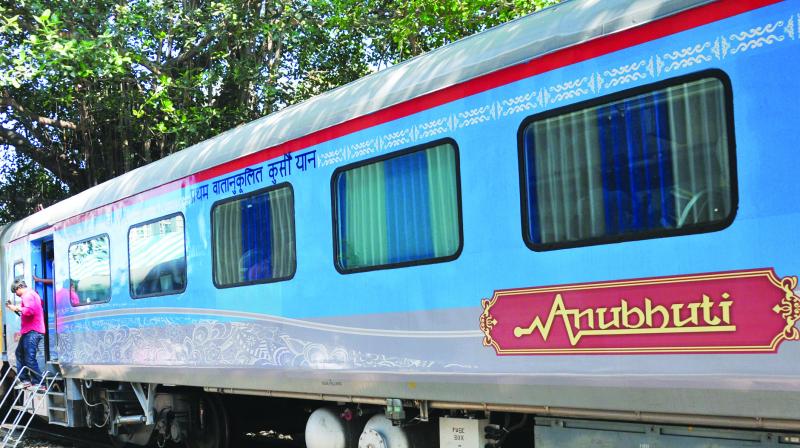 The train will have host of features such as spacious seats that put it in class of its own. (Photo: DEBASISH DEY)

Mumbai: The first of the two Anubhuti coaches allotted to Western Railway (WR) has rolled into the city, heralding the arrival of comfortable journeys for rail travellers that rival journeys by flight. Built at a cost of Rs 2.84 crore at the Chennai-based Integral Coach Factory (ICF), both coaches are likely to be attached to the Mumbai-Ahmedabad Shatabdi Express.

The 56-seater bogies, which simulate the interiors of aircraft, are superior to the much-talked-about Tejas Express, as their seats are spacious and footrests can be raised.  The presence of a call attendant button and — most importantly — an anti-scratch feature, which protects the overhead luggage compartment and floor from the constant bump and scrape of luggage, also puts these coaches in a league of their own.

Apart from these features, the Anubhuti will have facilities such as reading lights and pneumatic doors that open at the touch of a button in order to regulate the air-conditioning. The tray table is also similar to those found in aircraft as they fold into the back of the seat in front of the passenger. The fare for the coach will be higher than the first AC chair car, which is roughly Rs 2,000, officials have said.

Until now, the Vistadome coaches and those of the Tejas Express, which runs from Chhatrapati Shivaji Maharaj Terminus (CSMT) to Goa, have been advertised as luxury coaches for Mumbaikars, but railway officials are of the opinion that the Anubhuti coaches will raise the bar.