Ramesh Kadam, who is an under-trial, openly cast their votes for the BJP although voting for the council poll was through a secret ballot. 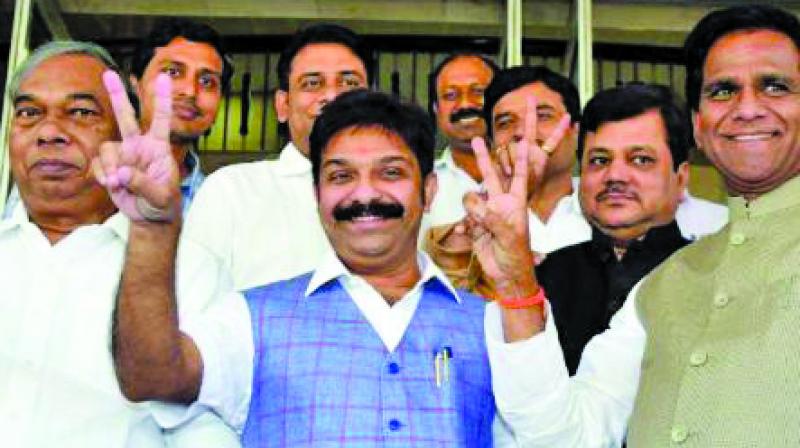 Nagpur: In the light of the suspected cross-voting that enabled Bharatiya Jan-ata Party (BJP) candidate Prasad Lad in winning the Legislative Council polls recently, Maharashtra Congress president Ashok Chavan said that such elections should not be held through secret ballot. It is alleged that around 25 legislators from the Congress and Nationalist Congress Party (NCP) had cross-voted during the polls.

Expressing doubts about secret ballot, Mr Chavan said that it has created a scope for malpractices. “A proposal had been sent to the Union home ministry when (late Congress leader) Vilasrao Desh-mukh was chief minister. He followed it up with the Centre, but for some reason the system wasn’t changed,” said Mr Chavan.

Mr Chavan said that he had lobbied for a change in the system while he was the chief minister but nothing came of it. “I also tried to change the system as a lot of things happen duringthe secret ballot. The power of money should not be used in such elections, but since it is a secret vote, there is scope for malpractices,” he said.

Mr Lad had won the council election with 209 votes against Congress-NCP candidate Dilip Mane who got only 73 votes.

A total of 14 cross-votes were witnessed of which nine were from Congress and NCP. Congress MLA Nitesh Rane and NCP MLA

Ramesh Kadam, who is an under-trial, openly cast their votes for the BJP although voting for the council poll was through a secret ballot.

The cross-voting had come as a big blow to the Congress and NCP, though the opposition was not going to win the poll. Also, Chhagan Bhujbal and two MIM MLAs did not come for the vote. Shiv Sena's minister Arjun Khotkar also did not come as his election process was quashed by the court. Two votes were declared invalid.