Interestingly, the BJP’s electoral symbol lotus was missing from banners at the venue. 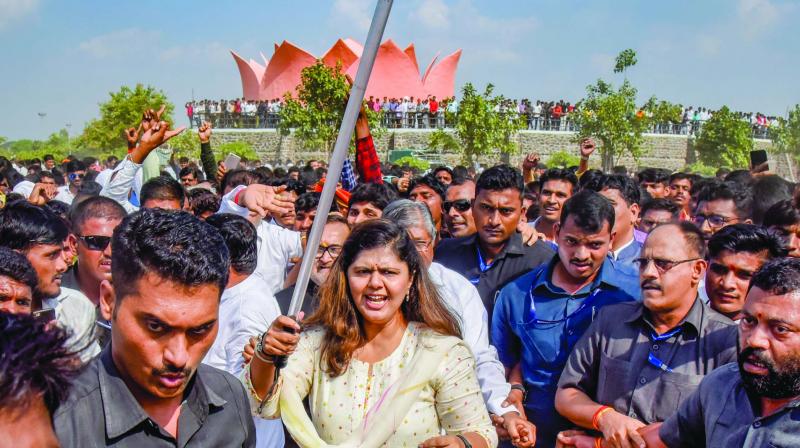 Senior BJP leader Pankaja Munde holds a police baton during her public rally on the occasion of the birth anniversary of her late father Gopinath Munde. (Photo: PTI)

Mumbai: An aggressive Pankaja Munde on Thursday challenged the Bharatiya Janata Party (BJP) to ditch her. The disgruntled leader, while addressing a public rally at Parli, also urged the party to relieve her from its core committee.

“I would not quit the party, but the party could leave me if it wants to,” Ms Munde said while addressing a rally on the birth anniversary of her father Gopinath Munde. “The party should also relieve me from the responsibilities of the core committee,” she added.

Interestingly, the BJP’s electoral symbol lotus was missing from banners at the venue. Though Pankaja made it clear that she would not leave the party, her statements clearly indicated that she will continue to pose difficulties to the party leadership in Maharashtra.

Pankaja announced a state-wide ‘Mashal Rally’ from January, which would begin with a symbolic day-long fast at Aurangabad. The move is being seen as an attempt to create pressure against former chief minister and current Leader of Opposition Devendra Fadnavis.

“I will hold a day-long hunger strike in Aurangabad on January 27. It will not be against any party or individual. It will be a symbolic hunger strike to attract the attention of the leadership towards the issues of Marathwada,” said Pankaja, one of the prominent Other Backward Classes (OBCs) leaders in the state.

She claimed that the BJP’s growth in the state was due to the efforts of her father. The former minister added that it was her father who made the BJP, once catering to only a few, acceptable to majority of the population in Maharashtra.

“Hence, I say that the party belongs to my father. If this party is again going into hands of the few, why should I not speak,” she said.

Pankaja claimed she was not lobbying of any post like the Leader of Opposition in the legislative council and added that there was a deliberate attempt to malign her image.

In the recent Vidhan Sabha polls, Pankaja, who was a former women and child care minister, suffered a defeat against her cousin, Dhanajay Mu-nde of the Nationalist Congress Party (NCP), from Parli — considered her stronghold. There were reports that some elements in the party worked hard to ensure her defeat in the polls.