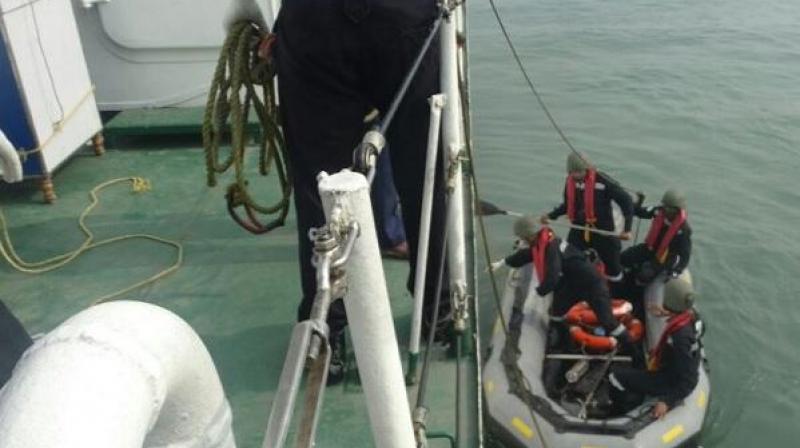 During the Search and Rescue (SAR) Operations on January 14, 2018 the VDR of the chopper has been recovered. Search operation is on for the remaining debris of the production chopper VT PWA. (Photo: ANI)

Mumbai: Six bodies including that of all the five ONGC officers and one of the two pilots of ill-fated Pawan Hans chopper, which crashed in Arabian Sea on Saturday, have been recovered.

While the search is on for the remaining one person, the ill-fated Chopper's VDR too has been recovered, ONGC said in a statement.

Bodies of ONGC officials P N Srinivasan, R Saravanan, Jose Antony, Pankaj Garg and one of the pilots Capt R Ohatkar, have been identified, the statement said. "The identification process for the sixth body is still on."

"During the Search and Rescue (SAR) Operations on January 14, 2018 the VDR of the chopper has been recovered. Search operation is on for the remaining debris of the production chopper VT PWA," it said.

The search operation is being steered by the ONGC top management led by Shashi Shanker, CMD ONGC.

Shanker, who has been camping in Mumbai to oversee the search operations as well as ensuring all support for the bereaved families, has stated that a high level independent investigation will be immediately instituted to ascertain the reasons.

The recovered bodies of ONGC executives, after necessary procedures, have been handed over to the family members and two families have taken the bodies to their native places for last rites as desired by them. ONGC is extending all possible help to the bereaved families in this hour of grief and crisis, it said in the statement.