Tells officials not to take punitive action for 3 mths. 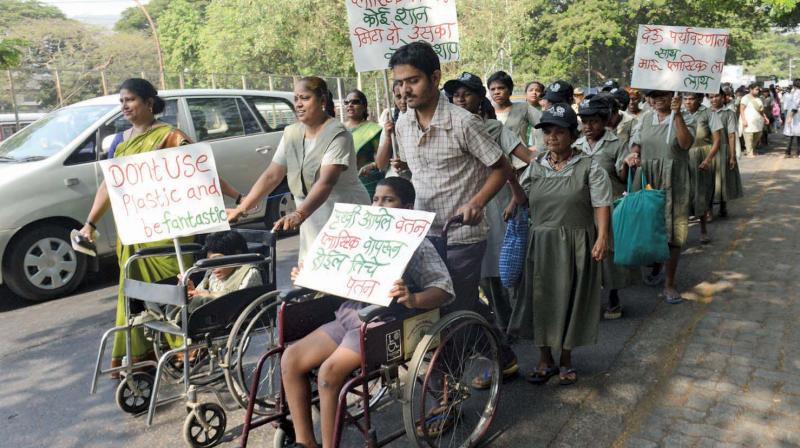 Differently abled children take part in an awareness rally in favour of the plastic ban at the Children’s Aid Society to Mankhurd station. (Photo: Rajesh Jadhav)

Mumbai: The Bombay high court on Friday refused to grant an interim stay to the state plastic ban even as it gave a breather to the public by directing the authorities not to take punitive action for three months.

A division bench of Justice Abhay Oka and Justice Riyaz Chagla directed the state to hear the representation of the plastic manufacturers seeking changes to the notification and take a decision by May 5.

The court said that prima facie the government had placed sufficient material before it and the ban was reasonable and it does not feel that “the imposition of such a ban infringes on the fundamental rights of the petitioners”.

The court said, “We are aware that the petitioners and all those persons involved in the business of plastic material may suffer loss due to the ban. However, we have to consider the impact of plastic waste on the environment and the effect thereof on citizens.”

The court was hearing a bunch of petitions filed by the PET Container Manufacturers Association and the All India Plastic Manufact-urers Association challenging the March 23 notification banning the use and manufacture of plastics. The notification gave three months to manufacturers, distributors and retailers to dispose of their existing stock of the banned items. But users were given only one month to get rid of such items.

The state notification pertains to plastic bags, disposable plastic spoons, forks, cups, glasses, containers, PET bottles of less than 500ml, and thermocol used for decoration. The state issued the notification using the powers derived from the Maharashtra Non-Biodegradable Garbage (Control) Act, 2006. The state modified the rules on April 11 and allowed PET bottles of all capacity “made of high-quality food-grade virgin bisphenol-A free material” with a pre-defined buyback policy printed on it.

The manufacturers would also have to set up collection centres, reverse vending machines and crushing machines at different places.