All seven penguins put together eat around 5-6kg of fish every day. 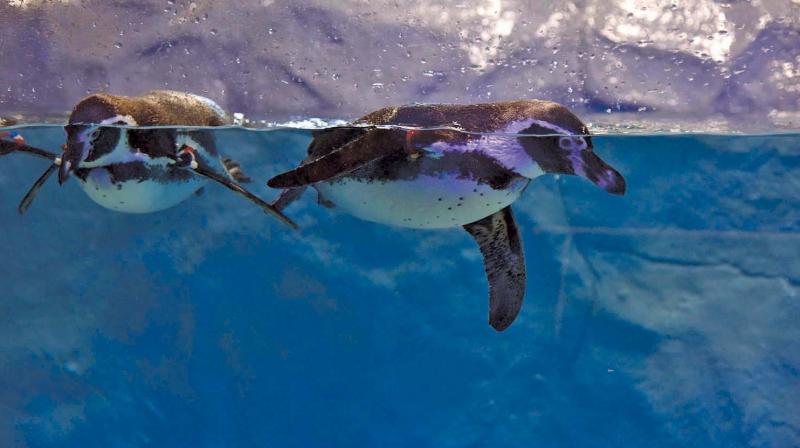 Bombay duck accounts for half of their meals.

Mumbai: Penguins at the Byculla Zoo are literally feasting on their favourite food — Bombay duck. To keep the birds happy the zoo authorities have increased the supply of the local fish for their consumption.

According to zoo officials, ever since the exotic birds arrived at the Byculla Zoo nearly two years ago, they have developed a special liking for the Bombay duck, called Bombil in the local language. All seven penguins put together eat around 5-6kg of fish every day of which Bombay duck comprises half of their meals.

“Penguins like Bombils as they are fleshy and juicy. Hence, we had to increase the stock of Bombay duck in the last few months. They would not mind eating Bombils all the time if we feed them. But we have to take care of their diet on the basis of their growth. Hence we balance their diet by feeding them fish that rich in oil such as eels, sardine and Mandeli,” said Dr Sanjay Tripathi, the zoo director.

The zoo authorities earlier used to order 40-50kg of fish every week for the penguins. Due to the increase in food intake, fish is being ordered every four to five days. The fish meat is kept in deep freeze (under 20 degrees centigrade) at the zoo. After it is taken out, it is cleaned with water and the unclean parts discarded before being fed to the penguins.

“Three male and five female penguins earlier used to eat 3-4kg of fish every day. Along with their growth, their intake now has increased to 5-6kg. However, their food habits also vary as per the season,” said one of the doctors looking after the penguins.

Their appetite increases before the start of moulting season, which fall in July and August, the doctor said. “Moulting refers to when penguins get a new coat of feathers, which is around twice a year. Before this period, their hunger increases and we feed them more fish. However, after moulting and during the breeding season, they eat very little. So we order the food accordingly.”