On Saturday when several citizens gathered at the garden for a cleanup, they were appalled to recover around 200 beer and liquor bottles in an hour. 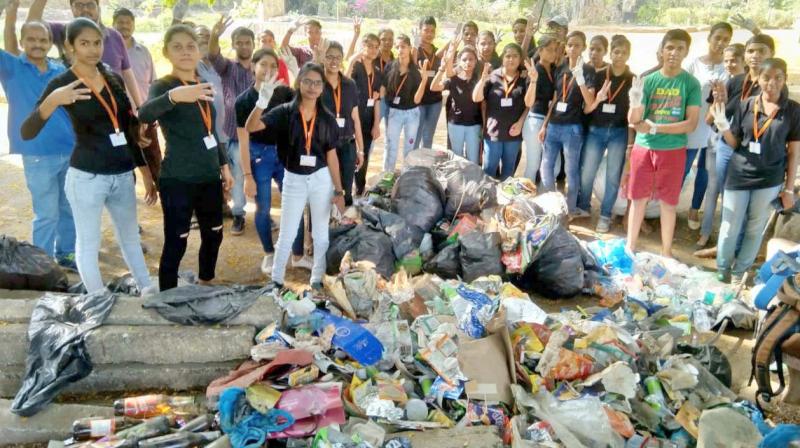 Mumbai: A once green space inside Aarey Colony, famously known as Chhota Kashmir, has now become a haven for drunkards and drug addicts. On Saturday when several citizens gathered at the garden for a cleanup, they were appalled to recover around 200 beer and liquor bottles in an hour.

Around 50 citizens from colleges and offices gathered at 8am Saturday to begin the cleanliness drive undertaken by Mission Green Mumbai, a citizens’ initiative working towards preserving green spaces in Mumbai. The garden, which was once famous as a tourist spot, was found to be reeling with waste as 200 liquor bottles and around 400 bottles of PET drinking water were recovered from the site.

“We have started this initiative of cleaning the garden and making it as beautiful as it was before. However, we were shocked to find such a mess in the garden. For years, nobody has taken care of it. The swings are found in a broken condition, trees have dried up, and there are no birds now in the garden. As such, we have decided to clean the garden every Saturday and plant trees there before the monsoon,” said Subhajit Mukherjee, founder of Mission Green Mumbai.

Apart from the bottles, around 100 kg of chips and food packets were recovered from the garden during the cleanup. At present, the garden sees more than 600 visitors daily, however given the deplorable condition of the garden, families have stopped coming here and it is plagued by anti-social elements mostly.

“We also learnt that the external contractor who was maintaining the garden is no longer there and the entire 10 acre garden is managed by four persons including the gardener, sweeper and guards.” said Mr Mukherjee.