The autopsy of carcass revealed that the tigress was a sub-adult, about one-and-a-half years’ old. 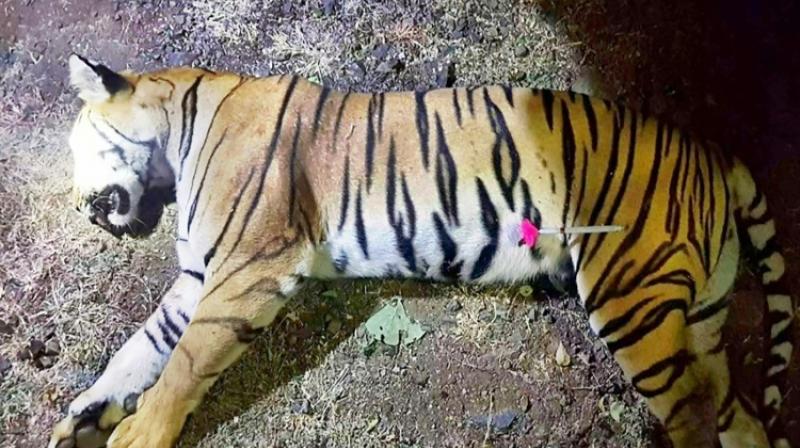 According to officials, the tigress died due to strangulation after getting caught in the wire-snare trap. (Photo: File | AFP)

Mumbai: A tigress was found dead at the Tadoba-Andheri Tiger Reserve (TATR) Friday. Officials from the reserve said that it was a case of poaching as the tigress was found caught in a trap set by poachers in eastern Maharashtra.

Initial reports of the autopsy of the carcass revealed that the tigress was a sub-adult, around one-and-a-half years’ old. The carcass was spotted by a forest guard Friday evening, said the chief conservator of forests and TATR field director, N.R. Pravin.

“She might have died two days ago as the carcass had started to decompose. She died due to strangulation after getting caught in the wire-snare trap, which was set for herbivores such as deer or wild boars in the core zone of the TATR,” he said.

Officials from the TATR further said that a probe was underway in the matter to identify the miscreants behind the deed. Poaching of tiger is a violation of the Wildlife Protection Act, 1972.

Meanwhile, in a case of man-animal conflict, a man was killed in a suspected tiger attack in the Kothari forest range in Chandrapur district of Maharashtra, an official said Saturday.

A resident of Parsodi in Gondpipri tehsil, Nandu Bobde (50), had gone into the jungle to collect mahua flowers Friday. However, he did not return till night.

“Later, his body was found in compartment 530 of the range. As initial compensation, Rs 3 lakh has been paid to his family,” said S.R. Langade, range forest officer.