100 detained in wake of Aurangabad riot 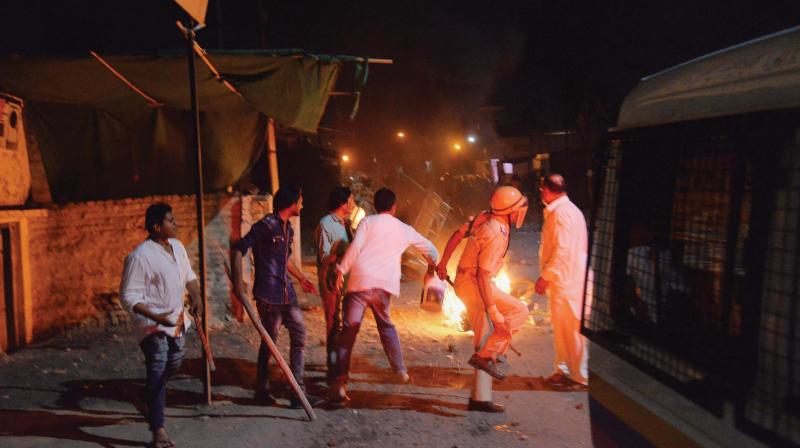 A communal riot escalated due to clamping illegal water connection in a religious place in Moti Karanja area of Aurangabad on Friday. (Photo: PTI )

Mumbai: A day after quelling rioting in Aurangabad in which two died and at least 40 others sustained injuries, the local police has begun a crackdown against culprits, detaining over 100 persons over their alleged roles in arson incidents in several parts of the old city in the intervening night of Friday and Saturday.

The police is recording eyewitness accounts to apprehend miscreants and rioters. The primary reason behind the riots is learnt to be over an illegal water pipeline being cut. Reports stated that friction was first reported between two communities after the municipal team cut the illegal water pipeline of a mosque and didn’t cut the connection of a temple following pressure from locals.

All the police stations have been informed to register cases pertaining to rioting and not to turn away anybody. Several police teams have been formed to investigate the incidents that took place in multiple pockets of the city.

“We have detained suspects and are verifying each person's role following which everyone concerned is being formally arrested. This is the process that all police stations are following,” said Milind Bharambe, who is currently holding the additional charge of Aurangabad police commissioner.

The police has registered six cases till now pertaining to rioting and arson, and officials said that more complainants are coming forward. Officials have been asked to put everything told by the complainants, on record.

The police used teargas shells and plastic bullets to control the rioting and arson in which several personnel were also injured.

The situation was controlled after prohibitory orders were imposed as per section 144 of the Criminal Procedure Code (CrPC) banning assembly of four or more persons. The mobile Internet services are also under suspension for 48 hours.