Bus was ferrying 49 school kids and 18 other passengers. 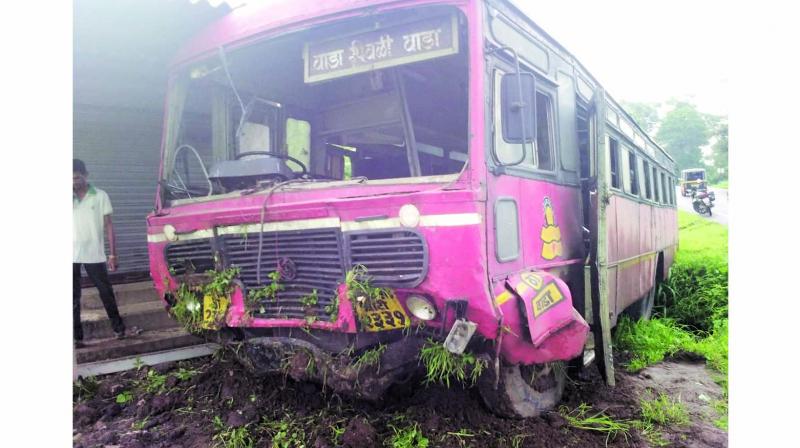 At around 7 am near Jambhulpada, the driver of the bus lost control of the vehicle.

Mumbai: Around 49 school children had a major scare on Tuesday morning after a state transport bus (ST) in which they were travelling, lost control and landed in an open drain at Wada in Palghar district. Another 18 to 20 passengers were travelling in the same bus along with the students.

The police have arrested the driver. All the passengers, including students sustained injuries and are undergoing treatment at the sub-district hospital at Wada.

The ST bus was running en route Wada and Pivli villages ferrying school students and other passengers when it met with an accident at around 7 am. The police said that the bus driver, identified as Vinayak Jadhav (27), lost control of the bus and it landed in an open drain inside the bushes at Jambhulpada village.

According to a source, the driver claimed that a woman suddenly emerged in front of the bus. In an attempt to save her, the driver lost control and the bus went into the pit near the road leading to the mishap.

“The school children sustained minor injuries in the incident and were taken to sub-district hospital for administering medication and conducting further check-up. The driver stated that he was trying to save the woman when he lost control of the bus,” said an officer of Palghar police.

Among the lot of students, two sustained severe injuries to their head and chest and they have been shifted to Thane Civil Hospital, officials said.

The police have registered a case under Section 279 (rash driving) of the IPC and other relevant sections of the Motor Vehicle Act. The driver has been arrested and remanded to police custody for further investigation in the case.

In February this year, a bus of JP International school had met with an accident in Palghar injuring at least 15 students after the driver lost control of the bus and it rammed into a tree. The police said that the incident took place at around 1.10 pm in the jurisdiction of Satpati police station.

The bus was occupied by 15 students, a female attendant and the driver.