Currently the Rajdhani takes 15 hours and 50 minutes to reach the capital. But it will now take 13 hours and 55 minutes. 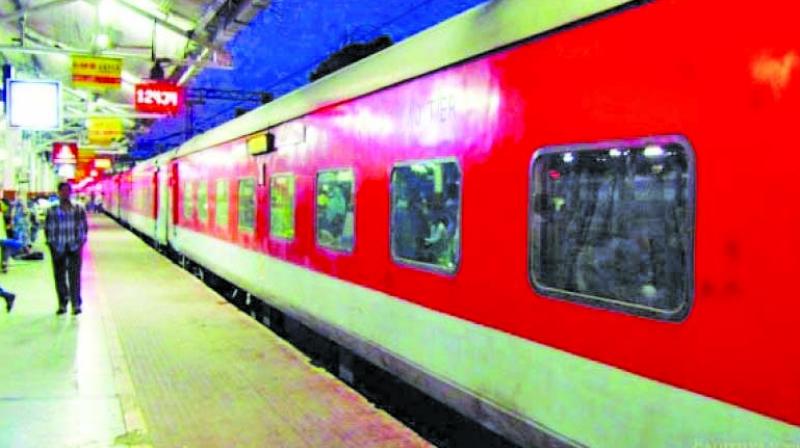 The train will run thrice a week from October 16.

Mumbai: Touted as Indian Railways' gift to passengers ahead of Diwali, the journey between Mumbai and Delhi on the Rajdhani Express will be cut down by two hours from October 16.

Currently the Rajdhani takes 15 hours and 50 minutes to reach the capital. But it will now take 13 hours and 55 minutes.

The special train will be introduced on this route on October 16 from Bandra Terminus (BDTS) in Mumbai to Hazrat Nizamuddin (HZM) station in Delhi.

The express will run at 130 kmph from the earlier 110 kmph. It  will have tatkal fares and will run thrice in a week from each direction.

The railways had been conducting trials of the trains by making modifications to the coaches and have reduced the current number of coaches to 18 from 22 in order to achieve the 130 kmph speed.

Officials said that even though the train will be exempted from the flexi-fare system, that sees surge in prices with increase in the number of booked, they will still be 20 per cent more than the base fare of all the classes.

Western Railway (WR), chief public relations officer Ravindra Bhakar said, "We hope that the public will take the facility of faster commute and lesser travel time between the two metros." The tentative time for these trains have also been allotted with the first train on October 16 departing from BDTS at the special train will start at 4.05 pm from BDTS and reach NZM at 06.00 am. It will depart from BDTS on Tuesday, Thursday and Saturday. This train will be introduced on an experimental basis for three months from October 16, 2017 to Jan 16, 2018 to gauge the public response.