he EMRs are in collaboration with the ‘One Rupee Clinic’ at Dadar, Kurla, Ghatkopar, Vashi, Wadala Road and Mulund stations. 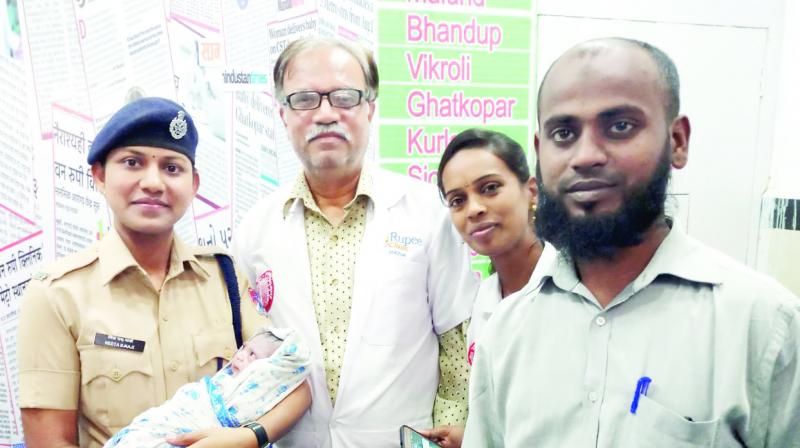 Mumbai : Jyoti Ajay Pawar  (20) delivered her baby with the help of doctor at the Emergency Medical Room (EMR) at platform number six of the Dadar railway station on Wednesday morning. Some male commuters alerted the RPF office in Dadar and informed the on-duty woman constable Swati Patil about a pregnant passenger, who needed emergency medical help. Pawar was lying on the foot-over-bridge in the middle and RPF constable Neeta Maji, immediately rushed to her along with other RPF staff.

With the help of a few co-passengers, the RPF team took the pregnant woman to the EMR. The woman, who is a resident of Kalwa, delivered a healthy baby boy around 10. 20 am with the help of doctors.

Pawar, who was eight months pregnant, was travelling from Kalwa to CST to do some shopping. But as the train reached Dadar station, her labour pain started.  Looking at her situation, the other women passengers started helping her towards the EMR. But the immense pain had her rolling on the ground on the FoB. Looking at her condition, some male commuters rushed to the EMR and called the medico for aid.

RPF Inspector Satish Menon said,  “As soon as we got to know about her case, my whole team rushed to help. Dr Pravin Rawal, who conducted the initial check-up, assisted her and carried out a normal delivery.” As per the information received from the doctors, the baby boy weighs 3 kgs and both mother and baby are fine.

Dr Rawal said, “ I was on duty when I received the call, I carried out the delivery with the help of the railway police. The lady was eight months pregnant.” He added, “There was enough time for her delivery but she went into labour.  We have sent her and the baby to the civic-run KEM for the further treatment.”

The EMRs are in collaboration with the ‘One Rupee Clinic’ at Dadar, Kurla, Ghatkopar, Vashi, Wadala Road and Mulund stations.