Police nabs 2 who who posed as IT sleuths in Thane

Crime branch Unit 2 of Navi Mumbai officers got this case, and they started plotting plans to arrest the accused. 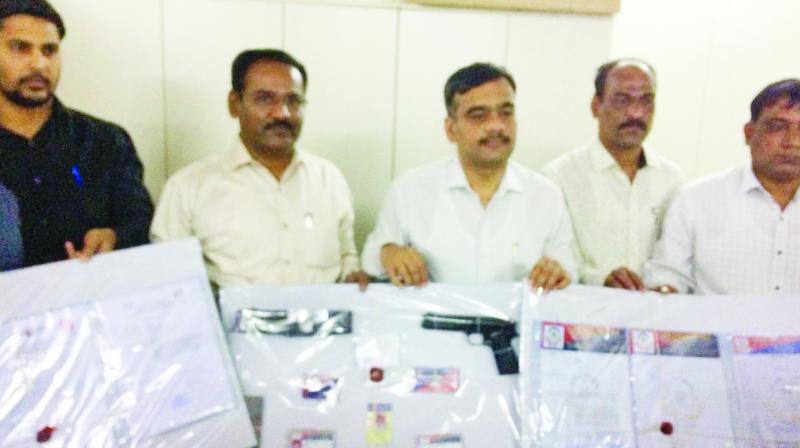 Police show the fake pistol handled by the accused.

Mumbai: Acting on a complaint from a businessman, the Navi Mumbai police arrested two men who created a group to pose as officers Income Tax department and the so-called ‘Crime Intelligence Force’ (CIF) and ‘Intelligent Investigation Agency’ (IIA) and duped several businessmen in Thane and Navi Mumbai.

Their modus-operandi seemed like a slice out of the Bollywood movie, ‘Special 26’. The accused got themselves toy wireless sets and guns, fake identity cards the conducted raids, including at a trader's office in Navi Mumbai.

The accused had hired 55 youngsters, claiming that they were hired for government jobs. But after Navi Mumbai police arrested the duo, the youngsters came to know about this fraud. According to a police officer, on January 10, Khandeshwar police received a complaint from a businessman stating a group of people, who called themselves officers of ‘Crime Intelligence Force’ (CIF), had abducted them then took him to their ‘office’ and thrashed him for not giving money in lieu of not taking action against his alleged business malpractices. The accused had also threatened to make cases against him had he not paid.

Crime branch Unit 2 of Navi Mumbai officers got this case, and they started plotting plans to arrest the accused. Crime DCP Tushar Doshi said, “ The main accused who is identified as Anand Tripathi, resident of UP has created his office on the name of Crime Intelligence Force (CIF) and Intelligent Investigation Agency (IIA). He showed his friend Mahesh Bhadke as Maharashtra chief and started appointing youngsters for the government job.”

Doshi said, “ We are now investigating this case further and getting details.