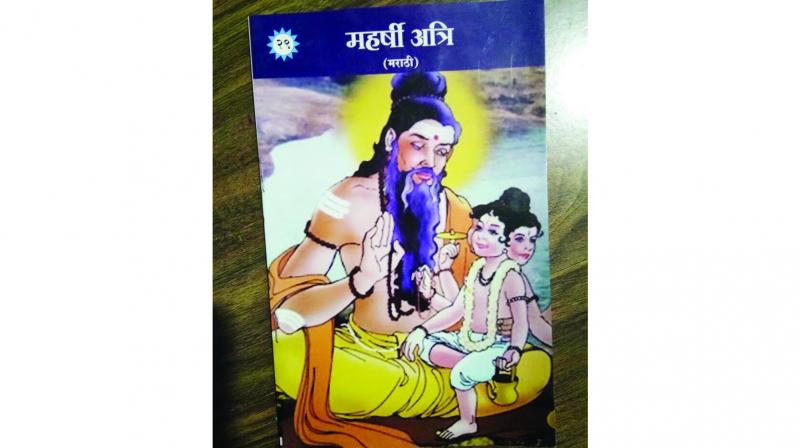 There are books on Phule, Ambedkar and other eminent figures. So singling out the books on Modiji is unfair,” said Mr Tawde.

Mumbai: After being lambasted by academicians and opposition leaders over the recent book row, state education minister Vinod Tawde on Wednesday said that he would take a re-look at the books — Bal Nachiket, Bhagwan Ved Vyas which allegedly contains obscene language. The BJP leader also clarified that his department has not disrespected or discriminated leaders like Mahatma Gandhi and Dr Babasaheb Ambedkar while buying the supplementary books for class 1 to 5 students.

The state government was left red-faced after several people slammed it for buying the books at higher rate and the ‘obscene’ language in it. Some people have objected to the conversation between mythological figure like Matsyagandha and Parashar, which according to them has references of ‘sex’ and ‘loss of virginity’. (See Box)  Likewise, in the book titled Saradamata, the characters Ramkrishna and Saradamata are allegedly talking about sexuality, which according to Opposition leader Radhakrishna Vikhe-Patil is ‘regressive’ and ‘inhuman’.

Mr Tawde said that he did not read all books and the Opposition leaders should have talked to him first before levelling these allegations.

Mr Tawde said, “I have not read these books. Had Mr Vikhe-Patil called me and brought to notice such facts I would have asked to stop the distribution. But they want to make this a political issue against the government. Now, an expert committee will re-look into the objections and decide.”

“The syllabus on these great leaders is already there. This purchase is only for supplementary reading material. The government has also bought almost four lakhs books on Shivaji Maharaj.

There are books on Phule, Ambedkar and other eminent figures. So singling out the books on Modiji is unfair,” said Mr Tawde.

There was also another controversy over purchasing of few other books. State government has bought books like Bal Nachiketa and Bhagwan Ved Vyas. In these books there are many instances where alleged obscene language has been written.