Tech issues lead to delays in refuelling, which irks consumers. 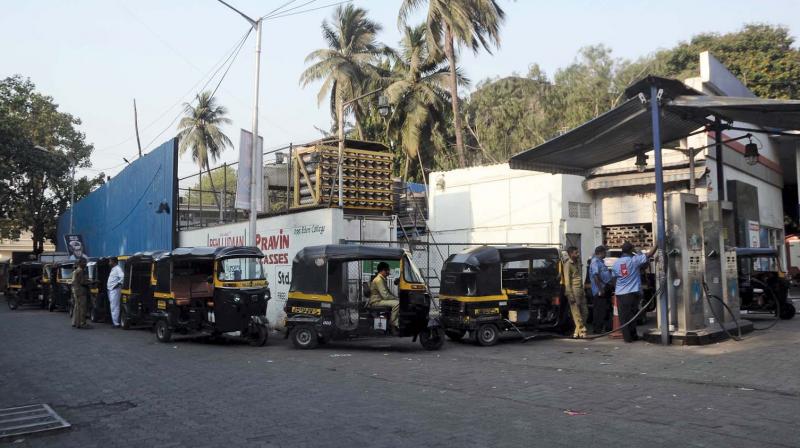 Users complain they have to wait for 30 minutes to refuel their vehicles with CNG.

Mumbai: The government push for greener fuel is facing a threat as queues at compressed natural gas (CNG) filling stations are getting longer.

The Mahanagar Gas Limited (MGL), tasked with CNG distribution in the Mumbai Metropolitan Region (MMR), is struggling to meet the demand in time as more vehicles switch to the greener fuel.

Users complain they have to wait up to 30 minutes sometimes to get a fill.

Transport expert and member of the Railway Passengers Committee Anil Tiwari said that more than seven lakh vehicles run on CNG in MMR, but there are not enough CNG dispensing points.

As the government of India is promoting the go-green initiative, new CNG vehicles are coming to market to reduce the carbon footprint. Hence the number of CNG dispensing points should increase, Mr Tiwari said.

MGL’s compression capacity should be increased to 50-lakh kg per day, he said. The way, the CNG vehicles are increasing each year, the MGL should add 10-15 lakh kg CNG each year at least for next four years. Only then would the problem of queues get tackled, according to him.

In a bid to reduce long queues that are seen outside CNG stations, MGL is promoting more stations and inviting third parties who have the land and permission to set up the stations, an MGL spokesperson said.

MGL claims that it has 1,290 dispensing points across MMR and has the capacity to fuel over 11-lakh vehicles, which is double of the number of vehicles on the road.

However, due to some technical difficulties, it takes longer to fill CNG in the vehicles, which leads to long queues outside the CNG stations, MGL official Neera Asthana-Phate told The Asian Age.

“To ensure availability of CNG across its network area, MGL has an infrastructure of 223 CNG stations with 1,290 dispensing points spread across MMR. The present infrastructure has the capacity to dispense more than 30 lakh kgs of CNG per day, which can fuel over 11 lakh vehicles in its operational area.”

Additionally, MGL has also launched MGL Connect App, which will assist our consumers to know the nearest CNG station in MMR, for better fuelling experience.

Ms Asthana-Phate admitted that the queues are long in mornings and evenings. “The time for filling required is more for gas not because of quality of the equipment but because of the properties of the gas. To fill 5kg gas, it will take five minutes at present. But we are working on how to reduce the timing. A research is going on how to reduce the timing. Besides, we are working on out to reduce the queue. For which, the number of dispensers are being increased in many stations wherever space is available.”