Experts say that it is critically injured and doesn’t have one of its flippers and the other is injured. 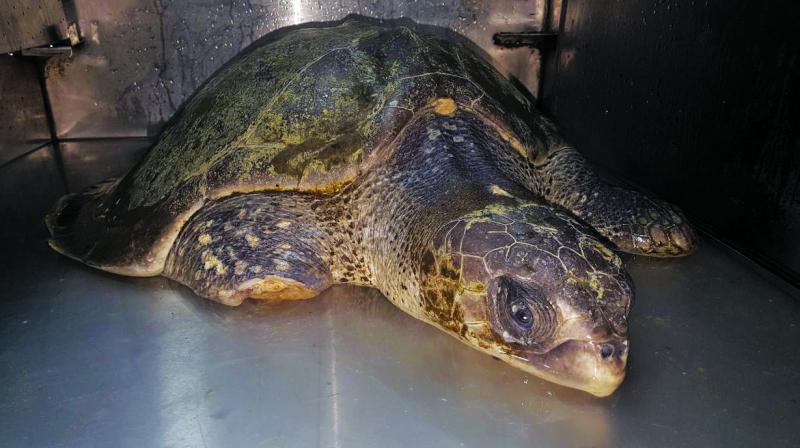 The turtle was then rushed to Dr. Rina Dev’s clinic at Bandra for a quick treatment.

Mumbai: An Olive Ridley sea turtle was found at Juhu beach on Friday evening. It is for the first time in this year that the schedule I species turtle was found at the beach. Experts say that it is critically injured and doesn’t have one of its flippers and the other is injured.

The rare species turtle also known as Pacific Ridley sea turtle, was rescued by a four member rescue team of Resqink Association for Wildlife Welfare (RAWW) from Juhu beach at around 4.30 pm. This was done after some of the locals had noticed the turtle and informed RAWW about its presence. The turtle was then rushed to Dr. Rina Dev’s clinic at Bandra for a quick treatment. It will however be later shifted to Wildlife Conservation and Animal Welfare Association (WCAWA) Sea Turtle Rescue Centre at Dahanu with the help of Mangrove Cell of the Forest Department.

These turtles are medium-sized species in sea turtles and are found in warm and tropical waters, mainly in Atlantic Ocean, Indian Ocean and Pacific Ocean.

Sagar Pandhi , Harshit Savla , Mitesh Raimangiya and Pawan Sharma reached the beach after a call was received. They however, realised it was an Olive Ridley turtle after they rescued it. “The turtle has two missing flippers, the third one is injured while only one is functioning.”, said Honorary Wildlife Warden of Thane, Pawan Sharma.

Around 15 turtles have been rescued in a month. These largely include Olive Ridleys who are brutally injured and are without one flipper.