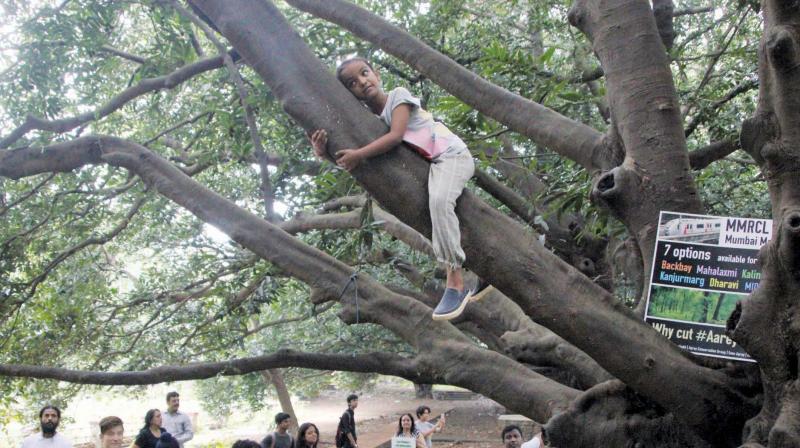 Mumbai: Aarey activists on Saturday staged a protest at picnic point, Aarey colony, against MMRC over the ongoing Metro car shed work on Aarey land. As part of the protest, nearly 100 supporters hugged trees a la the chipko movement to condemn use of forest land for the Metro shed. Aarey locals simultaneously followed suit.

Zoru Bathena, an activist from the “Save Aarey” group, said, "Many of us gathered at Picnic Point Saturday morning. We explained to everyone about the National Green Tribunal (NGT) order and the issue with Aarey land so far. We had planned a walk from Picnic Point to unit 19 but police was deployed there and did not allow us to go beyond picnic point.” Residents of unit 19 too participated in the protest and tree-hugging. Shabana Nandolia, a local, said, “I have been staying here for 40 years and it will be a huge loss if these big trees are axed.”

The activists claim that Metro authorities are carrying on work illegally for which permission has allegedly not been granted by the collector till now. Bathena said, “The collector had given them permission for excavation and not for any other activity. We have complained and the collector will come on Monday to inspect the site.”

Earlier this week, the activists lodged a formal complaint against MMRC at Aarey colony police station stating that illegal work was being carried out on 30 hectare Aarey land. Since the police did not take any formal action to stop work, the activists decided to stage a protest.