Around seven passengers, who were inside the bus, when the fire erupted, escaped unhurt. 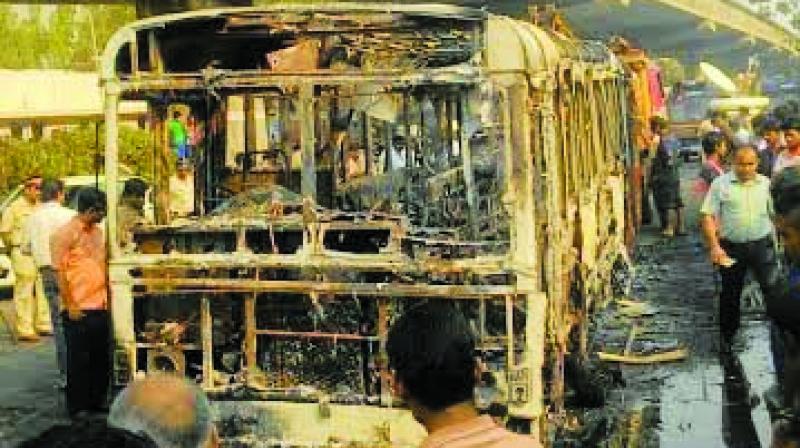 The bus was heading from Mulund to Andheri (east) on Sunday afternoon.

Mumabai: Brihanmumbai Electric Supply & Transport (BEST) bus caught fire near Chakala church on Sunday afternoon. Around seven passengers, who were inside the bus, when the fire erupted, escaped unhurt.

The BEST bus, which was headed from Mulund to Andheri, was a part of the 550 buses that were procured by the BEST under the Jawarhalal Nehru National Urban Renewal Mission (JNNURM) in the 2009. The bus was powered by CNG. An official said, “These buses are facing serious maintenance issues. We had to also face some contractual issue while procuring them. The material of these buses corrodes very quickly.” He further added, “We also don’t have enough people to look after these buses, so BEST faces difficulties in maintenance work.”

According to passengers, the incident took place at around 1:50 pm. After a loud explosion, the passengers immediately alighted the bus. A passenger said, “Luckily the bus was going at a slow speed. After the big explosion, the bus trembled.” The passenger further added, “We feared the worse but we got out quickly.”

The bus was completely charred, and a Maruti car that was next to the bus also caught fire. BEST public relations officer Hanumant Gophane said, “The driver has claimed that he first heard noise emanating from the engine. After he alighted the bus to examine the engine, there was a big explosion from under the bus.” He further added, “No injures were reported.” This incident comes just days after an accident. Six commuters were injured after a BEST double-decker bus rammed into a tree planted. The bus was travelling from Bandra to Kurla station.