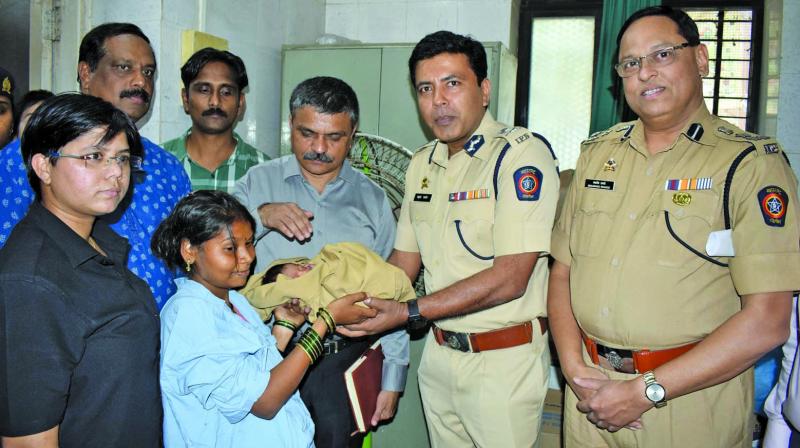 The stolen infant was reunited with his mother. (Photo: Deepak Kurkunde)

Mumbai: Within a day of the six-hour-old baby boy being allegedly stolen by from the Thane civic hospital, the Thane crime branch nabbed the accused duo and their male accomplice. The infant was found wrapped in newspaper pages at the accused couple’s rented residence in Kalyan, said police. Five other children aged between three and 11 years; including four girls, were also rescued from the house. The woman has admitted that she stole the baby on Sunday. However, she also insisted that the five others kids were her own. The police officials are verifying the claims. Meanwhile, the baby has been handed over to the parents.

The police suspects the trio could be part of a child-trafficking racket and are verifying if they wanted to sell the abducted kids or make them beg on roads. The police will conduct medical tests on the kids to find out if they have been abused. The accused were tracked based on the CCTV images procured from Kalyan railway station, which showed the woman with the stolen baby, said a police official.  The accused have been identified as Gudiya Sonu Rajbhar (35), Sonu Rajbhar (40) and Vijay Kailas Srivastava (55).

On early Sunday morning, the accused woman Gudiya had allegedly stolen the baby boy from the maternity ward of the Thane civil hospital. The mother of the six-hour-old baby boy, Mohini Bhuvar is a resident of Bhiwandi area. She had mistaken the accused woman to be a nurse, when the woman approached her, saying, ‘Your mother wants to see him’. The woman then allegedly fled from another door of the ward, taking the baby with her.

Thane joint commissioner of police Madhukar Pandey said, “After receiving the complaint, our team immediately checked the CCTV footages and forward the pictures of the accused on police groups. We then formed teams to find the accused and with the help of a tip off about the woman, we came to know that she was seen in the Kalyan-Pisavali area.”

Nitin Thackrey, senior police inspector, crime branch unit one, said, “When we laid the trap and raided the place today early morning, we found that the accused woman had five other children at her house, apart form the baby boy.”