Supreme Court disposes of plea on metro depot at Aarey

Initially, cutting of around 2,238 trees have been proposed, as notice for the same has been pasted on the Aarey trees. 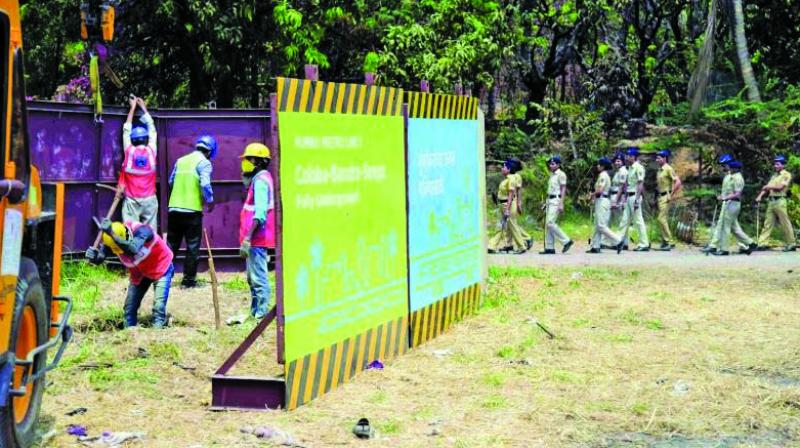 Environmentalists have been emphasising on Kanjurmarg plot as an alternative plot, given its flat surface and lesser impact on environment.

Mumbai: The Supreme Court on Monday disposed of the application seeking an enquiry into alternative sites for the car shed for the Metro 3 line that has been proposed in Aarey Milk Colony.

The activists who filed the petition in the apex court were disappointed stating that there was no proper hearing on Monday about the state government’s procedures and merits for discarding other sites. Initially, cutting of around 2,238 trees have been proposed, as notice for the same has been pasted on the Aarey trees.

A bench comprising Chief Justice Ranjan Gogoi, Justice Deepak Gupta and Justice Sanjiv Khanna was hearing the application when the court stated that the technical committee had earlier examined all the sites and found them unfeasible except Aarey Colony.

While upholding the Bombay high court’s earlier order, the apex court’s bench gave the verdict based on the technical committee’s report and disposed of the application within a few minutes.

While the state government had not filed an affidavit on the matter despite the apex court’s directions earlier, the petitioner stated that its counsel was not given a chance to refute the rep-ort’s content. “The application was disposed of within minutes and hence we could not refute that the same Kanjur-marg plot that was considered unviable, is now being used for Metro 6,” said Amrita Bhatacharjee, the petitioner.

“We had submitted all the relevant information about the car shed and alternative sites. The state government was earlier given one week’s time to reply on why the alternative sites are not being considered. Howe-ver, they did not respond,” said Zoru Bhathena.

The car shed for Metro 3 has been proposed on 33.3 hectares of land in Aarey, also known as green lungs of the city. Another petition challenging the change in reservation of ‘No Development Zone’ for the land to ‘Metro car shed zone’ is yet to be heard in the apex court.