The city will continue to get moderate rainfall Sunday as well, according to the disaster management unit. 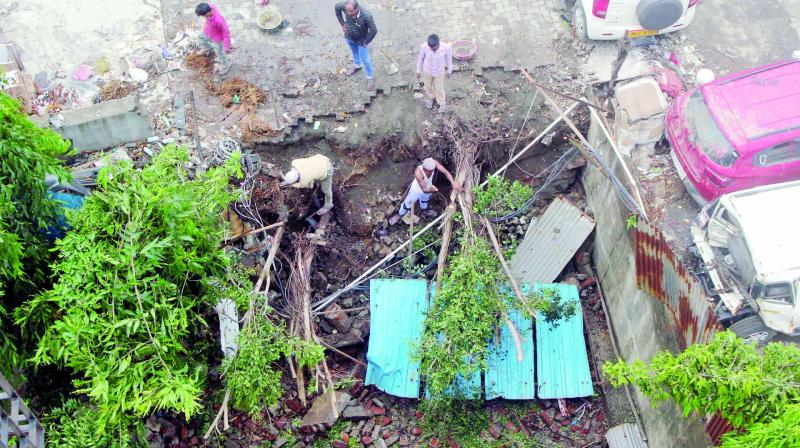 The major portion of a boundary wall at the Green Field Building in Malad collapsed on Friday. (Photo: MRUGESH BANDIWADEKAR)

While the city got a breather from the high-speed winds of the past couple of days, the overall climate was cloudy.

According to the Indian Meteorological Department (IMD), the city received 45 mm rainfall in the last 24 hours, with moderate to heavy rainfall predicted for the next four to five days.

Up to 6pm Saturday, the city area received  7.3 mm rainfall; eastern suburbs 7.2 mm; and western suburbs only 1.7 mm. Trees continued to fall across the city with 52 such incidents recorded Saturday and four late night Friday.

Due to rainfall, four incidents of wall collapse were reported. Late night Friday, a boundary wall of a building in Green Field, Malad, collapsed, crushing four to five vehicles parked next to it. However, no one was injured in the incident.

Train services ran on time Saturday even as roads in a few areas saw traffic  congestion.

The light but continuous showers led to traffic issues at a few places. In areas in the western suburbs where metro construction work is underway, barricades led to traffic jams in the evening.

The city will continue to get moderate rainfall Sunday as well, according to the disaster management unit.