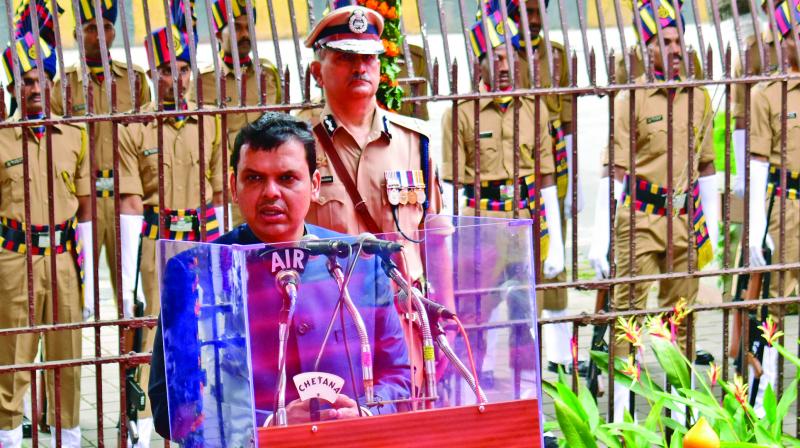 Chief minister Devendra Fadnavis during his speech at Mantralaya after hoisting the national flag on Wednesday. (Photo: Debasish Dey)

Mumbai: In his Independence Day address on Wednesday, chief minister Devendra Fadnavis tried to pacify all communities. He said that his government was committed to reservation for Marathas as well as welfare schemes for other backward classes (OBCs). He appealed for peace and harmony in the state in the wake of recent incidents of violence during protests for Maratha quota in government jobs and education.

“This is the state of Shahu, Phule and Ambedkar, where all are treated equally,” Mr Fadnavis said, referring to social reformers Chhatrapati Shahu Maharaj and Jyotiba Phule and Dr B.R. Ambedkar, respectively. “We must progress at all costs and that is why we have focused equally on all sections of society, in all areas of the state, be they urban or rural,” he said.

In his televised address, Mr Fadnavis also said that his government was committed to the cause of Maratha reservation. “We have said in the past as well, that our government is committed to the cause of reservations for the Maratha community. As soon as the backward classes commission submits its report, we will call a special session of the legislature within a month,” he said.

The CM praised Prime Minister Narendra Modi for giving constitutional status to the OBC commission. “It shows our commitment to all communities,” he said.

He also mentioned in his speech that Pune, Navi Mumbai and Greater Mumbai from the state have been ranked India’s three most livable cities in the “Ease of Living Index”, released earlier this week by the Union housing and urban affairs ministry.

“Maharashtra has witnessed a quantum jump in attracting investment. Around 42 to 47 per cent of the total investment in the country was actualised in the state alone,” Mr Fadnavis said in his speech.