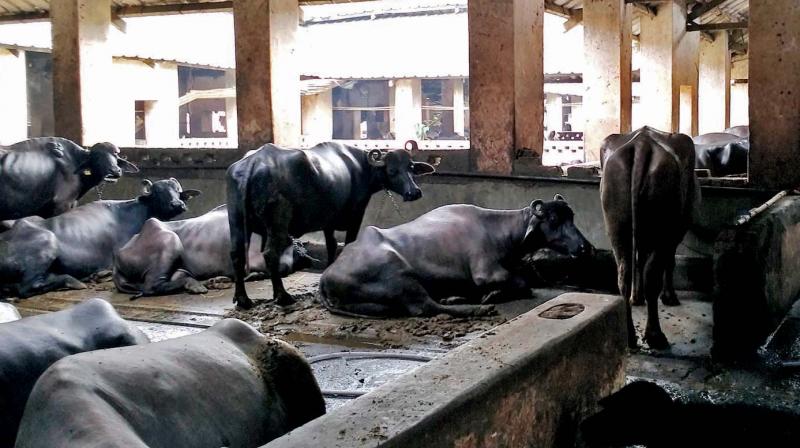 The cattle shed owners said the sleep cycles of their cattle had been disturbed.

Mumbai: The more than 60-year old dairy business operating out of Aarey Colony has been allegedly disrupted in certain pockets after the Seepz-Colaba Metro-3 project work started at Unit 19. The cattle shed owners located near the construction site said the sleep cycles of their cattle had been disturbed due to the noise caused by the construction. The disturbed cattle are now providing comparatively less milk than before, they said.

The cattle shed houses more than 500 buffaloes, and is shared by 14 owners who reside near the shed. Spread over four acres of land, the shed is excluded from the Metro-3 alignment. But two months ago, the Mumbai Metro Rail Corporation (MMRC) started work on the over ground station at Aarey Colony, close to the shed. According to the cattle owners, the milk production has come down from 2,200 litres of milk per day to 2,000 litres.

“If the cattle are exposed to loud noise continuously then they will undergo certain stress. Thus, disturbed sleep cycles and stress will have an impact on the milk production as well as on their oral health. Like human beings, cattle too need adequate rest and sleep,” said Guruprasad Mahadik, a city-based veterinary doctor.  “For five generations, we have been practising this profession. This is the first time that we are facing such a circumstance. It has been two months since milk production has come down. It has reduced by 500 ml. Initially, each cattle used to give us eight litres per day, which has reduced to 7.3 to 7.5 litres now,” said Aarif Nandolia, a 67-year-old cattle owner from Unit 19. “The work and the loud noise goes on from morning till night. We milk the buffaloes at around 2 am, after which they need to rest during the day. But due to the noise, they are cannot rest and sleep, which directly affects the milk production,” said Haroon Wazir, another cattle owner.

Despite several attempts, MMRCL spokesperson Sukriti Kumar was not available for comments.