The tiger shooting caused considerable anger, and raised questions over the nature of the killing. 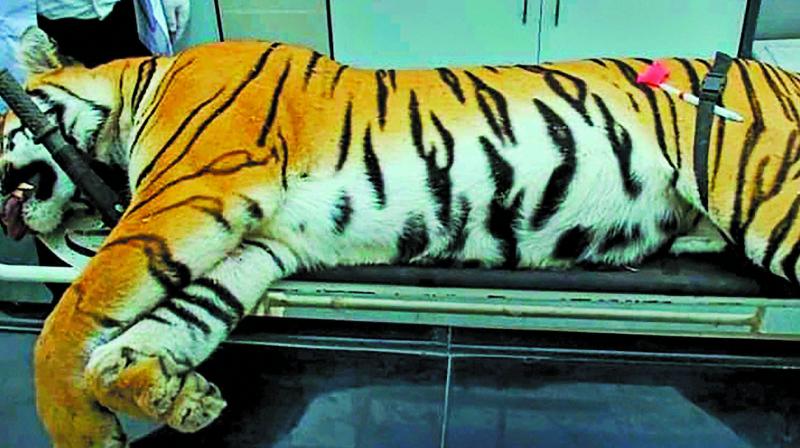 Mumbai: The orphaned cubs of a man-eating tigress killed in a state-sanctioned hunt have been spotted in a forest in Maharashtra and could be rescued and rehabilitated, officials said Thursday.

The mother was shot dead in early November after being accused of killing more than a dozen villagers, capping off one of the country’s most high-profile tiger hunts and angering conservation activists.

The months-long search deployed 200 hunters using paragliders, infrared cameras, sharpshooters on elephant back, and even Calvin Klein fragrance to lure the big cat.

The state forestry department’s A.K. Mis-hra said the cubs were “healthy and are surviving” and that specialists would assess whether they had acquired a taste for humans from their mother.

“The cubs may or may not have become man-eaters, depending on their proximity to their mother when she attacked humans,” he said, adding, “But we are hopeful of rescuing and rehabilitating them.”

Supreme Court had sanctioned the hunt in September, saying the big cat could be shot dead if tranquillisers failed.

Several appeals were lodged by animal activists who said the tigress — dubbed T1 by forestry officials but Avni by her advocates — said the mother was merely acting in defence of her young cubs.

The tiger shooting caused considerable anger, and raised questions over the nature of the killing.

Maneka Gandhi, a Cab-inet minister and passionate animal lover, even accused her counterpart in the forestry ministry of sanctioning a “ghastly murder” for sport.

The tigress was shot dead by Asghar Ali Khan, the son of India’s most famous hunter Nawab Shafath Ali Khan. Villagers in a Maharashtra district where the tiger had roamed celebrated her death by setting off firecrackers, local media reported.

India has launched a major campaign to boost tiger numbers. At the last tiger census in 2014 the population had risen to more than 2,200 from a low of less than 1,500.

But as urban areas have expanded in the country of 1.25 billion, conflict between humans and tigers has worsened.