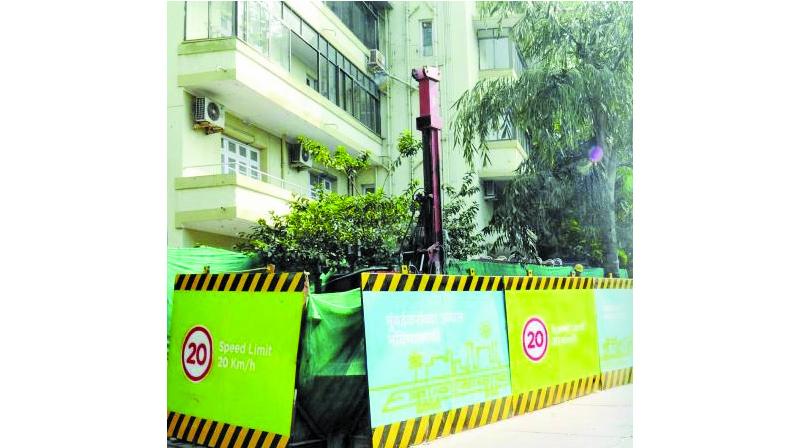 Trees to be axed

Mumbai: Around 753 additional trees will be axed to make way for the Colaba-Bandra-Seepz Metro-3 line, according to a tree activist Zoru Bhathena. In an undertaking given to the high court earlier, the Mumbai Metro Rail Corporation Limited (MMRCL) had claimed that 2,800 trees would be cut in the city along the alignments of the Metro-3 line. The MMRCL had earlier also stated that around 3,000 trees would be affected in Aarey Milk Colony for a carshed.

Activists have asserted that within eight months of the HC hearing, the MMRCL has come up with the proposal for additional trees to be cut and no prior information was given to the HC or tree authority. Out the 753 trees to be cut, 500 will be axed in Aarey Colony. Following the concerns raised by activist Zoru Bhathena, the high court committee members had directed the MMRCL last month to provide the list of all additional trees that have been proposed to be cut.

Five hundred trees will be razed in Aarey Colony for various purposes like launching shaft, erection of pylon and road diversion and casting yard at JVLR. “The MMRCL had claimed that it would try to save as many trees as possible out of the 2800 trees that they had mentioned. Instead, they are coming up with proposals for cutting more trees every month. The high court committee is also not notified about the developments. We have raised our grievances with the committee regarding it,” Mr Bhathena.

Apart from Aarey Milk Colony, additional trees that are slated to be removed are at Cuffe Parade, Vidhan Bhavan, CST, Mumbai Central, Mahalaxmi, Worli, Dharavi and Dadar. The MMRCL had claimed that it would carry out compensatory plantation and transplantation for the affected trees. During the inspection of transplanted trees at Kalina and Juhu circle on Tuesday, it was found that 50 per cent of trees were not sprouting. “Seventy out of 147 trees were seen without leaves. Some of them were dead,” added Mr Bhathena.

The MMRCL had earlier mentioned that the plan for construction work of metro station did not include entry and exit points due to which now the number of the affected trees have increased. Despite The Asian Age’s attempt to contact the MMRCL, the authority did not reply.