Lesser flamingos, which are relatively smaller and have a pinker hue than greater flamingos start arriving in Mumbai in November. 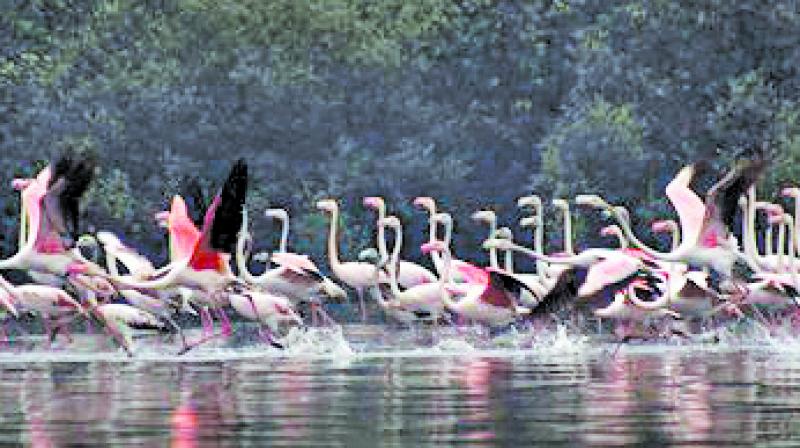 A flock of Lesser flamingoes in Mumbai. (Photo: PTI)

Mumbai: Lesser flamingos have finally arrived in Mumbai after a long absence. A flock of lesser flamingos in their full glory were spotted in Airoli on Tuesday. Bird experts have stated that the pink birds were seen in Mumbai last week.

“A few flamingos were seen on Sewri mudflats and Airoli last week. They usually arrive in less numbers initially, but their flocks increase eventually. The conglomeration of lesser flamingos in Sewri is the largest in western part of Asia,” said Asif Khan, bird expert in Bombay Natural History Society (BNHS).

Lesser flamingos, which are relatively smaller and have a pinker hue than greater flamingos start arriving in Mumbai in November. These pink birds fly over 600 km to Mumbai from Kutch during winter and congregate in Sewri-Mahul mudflats, Mulund, Seawoods and Bhandup, among other areas.

“The Sewri mudflats offer good amount of blue algae that the flamingos feed upon, this could be one of the reason that they chose to stay here.

They are native to Kutch and breed there, and fly to Mumbai for its vegetation,” added Asif Khan.

The BNHS will be organising a flamingo watch on Sewri mudflats on February 4.

Sewri is also the place for many migratory birds such as Broad-billed Sandpiper, Curlew Sandpiper, Black-tailed Godwit, Whimbrel, and Eurasian Curlew.