Now, get ready for 5-hour weekday blocks on WR

Considering that the railway hardly ever risks taking a block during the daytime for fear of commuter backlash, this block is unusual. 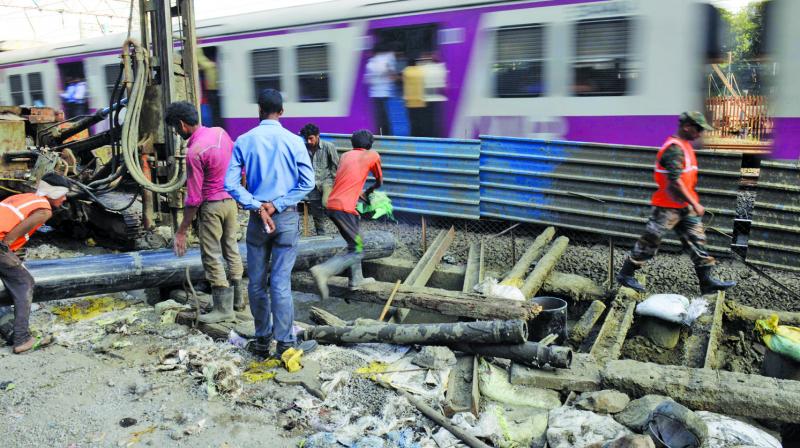 MUMBAI: Western Railway (WR) commuters need to prepare themselves for weekday blocks this week as the Army is slated to occupy an emergency daytime slot to finish work on Elphinstone Bridge. Considering that the railway hardly ever risks taking a block during the daytime for fear of commuter backlash, this block is unusual.

A railway official said, “We try to minimise the effect of blocks by taking them during the night and weekends but the nature of work is such that the Army will have to take a major block during the daytime and that too on a weekday.”

The Central Railway (CR) had recently come under fire after daytime blocks for the Seawood-Uran line were extended by four to five hours, leaving commuters stranded.

Another official said, “Ideally, the deadline for the job at Elphinstone and even Currey Road was January 1 but we are a little wary because the Army has not been able to do much owing to the fact that the line can be shut only for four hours in the night and doing any work during the daytime poses a threat to commuters’ safety.”

The Army had promised to build important connections to foot over-bridges (FOBs) at stations such as Ambivli and Currey Road on CR and most importantly, Elphinstone Road on WR after the stampede on September 29 which claimed the lives of 23 commuters during morning peak hours. Railway officials are also unsure as to whether the Army will be able to adhere to the January 31 deadline.

The day block for Elphinstone work might be five hours on the slow line in the coming week or two, said officials.