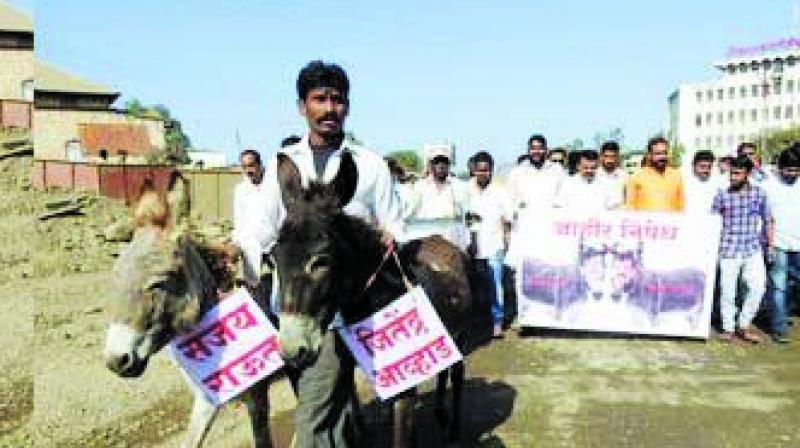 Former chief minister and the Leader of Opposition in the Asse-mbly Devendra Fadnavis said the kind of statements Mr Raut had made about the descendants of Chhatrapati Shivaji Maharaj was something that even the Mughals would not have thought of.

“I think that the ego of power is not right. The statement, which he made, he must take back. He should submit a public apology to the family of Chhatrapati else Maharashtra will never forgive him,” the Leader of Opposition in the Assembly added.

Meanwhile, the Bharatiya Janata Yuva Morcha, Mumbai on Thursday, too, demonstrated in front of the statue of Shivaji Maharaj adjacent to the Western Express Highway in Borivali East against the Mr Raut’s comment.

The supporters of Mr Bhosale supported the bandh. Mr Raut and Maharashtra minister Jitendra Awhad came under attack from Bhosale’s supporters for stating that NCP chief Sharad Pawar is the ‘Janata Raja’ (enlightened king), a title generally used for the legendary Maratha warrior king. The angry supporters tied placards bearing names of Raut and Awhad, an NCP minister, on the necks of two donkeys as they raised slogans against the two leaders.

On Wednesday, Raut had said that Mr Bhosale should give proof that he is a true descendant of Chhatrapati Shivaji, asserting that no one has ownership rights over the Maratha warrior king.

Mr Bhosale, a former NCP leader and Satara MP, on Tuesday, maintained that Chhatrapati Shivaji alone was the ‘Janata Raja’ as he took a veiled dig at Mr Pawar. Mr. Bhosale’s remark came in the wake of controversy over a book comparing Prime Minister Narendra Modi with the 17th century Maratha warrior king, a highly revered figure in Maharashtra.

The book, titled ‘Aaj Ke Shivaji: Narendra Modi’, is written by BJP leader Jay Bhagwan Goyal. Mr Bhosale, who joined the BJP ahead of the last year’s Assembly polls in Maharashtra, had said none can be compared with Chhatrapati Shivaji, but also took a jibe at Pawar over the ‘Janata Raja’ appellation.