Monorail may have emergency chutes

Chutes or escape chutes are a fabric tubes used for emergency exits, these are used at places where ladders cannot be deployed. 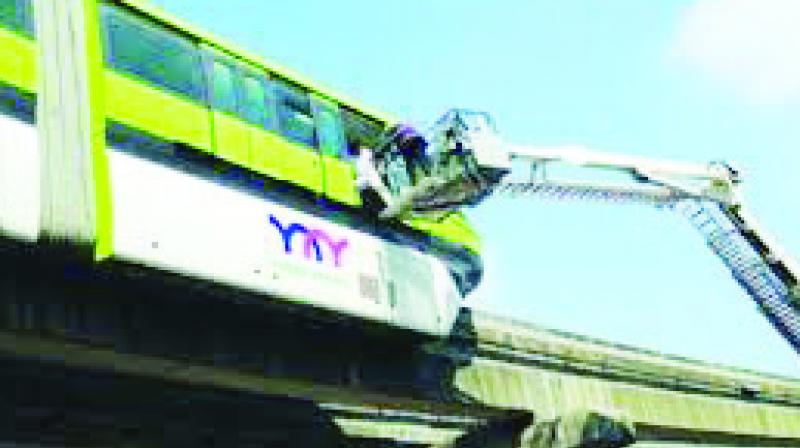 A file photo of commuters being rescued from the monorail near Mysore Colony station on November 9, 2017.

Mumbai: The MMRDA will soon appoint a consultant to design and review the emergency evacuation plan for the elevated monorail corridor. The corridor passes through isolated places like Mahul creek where there is no road access, thus to ensure commuter safety in cases like this, the authority is planning to have additional mechanism to evacuate commuters during mishaps like fire. Currently, the Chembur-Wadala route (Phase 1) is used by at least 18,000 commuters on a daily basis.

“We have floated tenders to appoint a consultant, it will take four to five months to add new features which will focus on easy evacuation of the passengers. We are deciding to equip the rakes with ‘chutes’. Nothing has been finalised so far,” said a senior MMRDA official.

Chutes or escape chutes are a fabric tubes used for emergency exits, these are used at places where ladders cannot be deployed.

They are generally used for carrying out rescue operations of highrise buildings, since the monorail corridor is elevated, there is a possibility of using chutes.

“The fire brigade had pointed out several spots which is inaccessible. For example, the area near Mahul creek, also there are few roads that do not allow two way movement. Thus in such spots, evacuation becomes difficult,” added the official.

After the fire incident at Mysore Colony station on November 8, 2017, the fire safety for monorail has come into focus. The authority might install smoke detectors inside the rakes.

“We are looking to install fire safety and evacuation equipments which are light, and do not increase the weight of the rake,” said the official. Two rakes were completely charred in the fire incident.