Soon, solar panels on rooftops to be binding

CC will not be granted if the builders avoid solar panel installation. 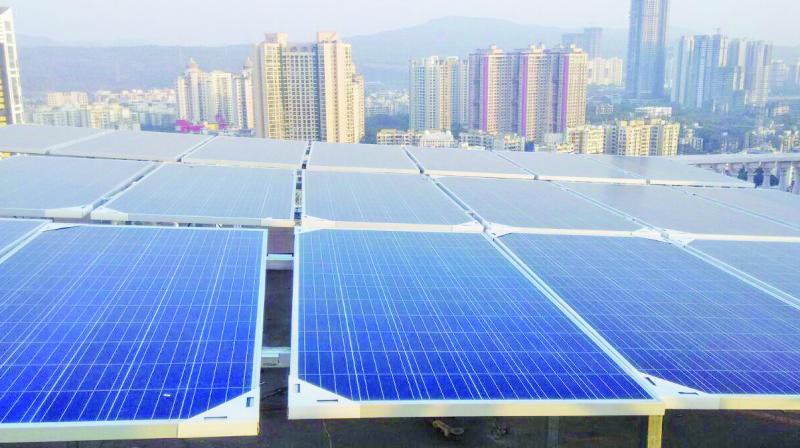 Concession to builders will be given in the initial stage.

Mumbai: In an attempt to encourage clean energy in Maharashtra, the state government is working on a policy to make it mandatory for builders to have solar panels installed at the rooftop in their projects. For any project after 2020, builders have to integrate solar panel installation in their projects, otherwise the CC (Completion Certificate) will not be granted. In 2017, around 328 buildings, including residential buildings, college institutions and government institutions installed solar panels.

“We are working on the legal aspects of the policy as of now. However, we will make it compulsory for builders to install solar panels on the rooftop of their projects after 2020. We are giving the builders due time to plan their projects in accordance with the policy,” said a senior official from the state Renewable Energy Department.

The state government is also planning to provide a concession to builders in the initial stages of the implementation of the policy. “We have decided to give minimal concession to the builders for the same to encourage them for installing solar panels. However, we are still working on it,” added the official.

Solar panel installations on rooftops of residential buildings increased by double last year in Mumbai as compared to 2016, according to Maharashtra Energy Development Agency (MEDA). Nearly 218 institutions, including residential societies, charitable trusts and educational and government institutions adopted the solar panel system last year, generating green power of 7773.3 kilowatt power (kwp). During the same period, there were a total of 328 proposals received under the Grid Connected Solar Rooftop Scheme (GCSRT) with green power of 8665.46 kwp.

“There has been a significant increase in proposals by housing societies for installing solar panel system last year. It shows that there is more awareness among the people to move towards clean energy,” said Vishal Shivtare, General Manager, MEDA-Mumbai division.